Hear the Demo For the Lonely Island’s Rejected Oscars Song “Why Not Me?” 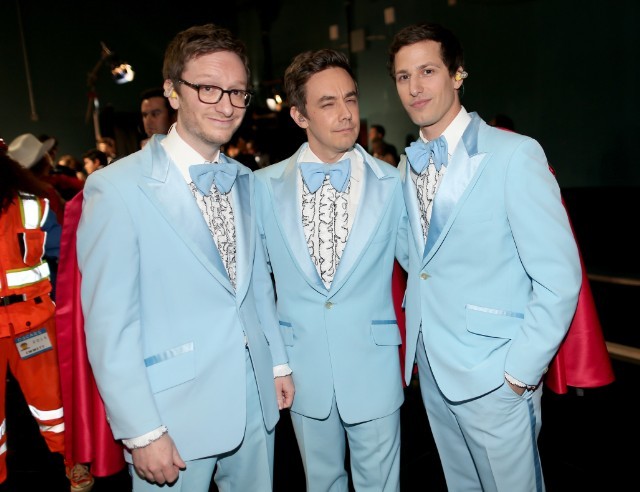 Those who sat through all four hours of the Oscars ceremony last night were treated to performances from a ton of artists, including Sufjan Stevens, Mary J. Blige, Gael Garcia Bernal feat. Miguel, Natalia Lafourcade, and more. What viewers didn’t get was another legendary performance from the Lonely Island, who brought down the house with Tegan and Sara when they performed “Everything Is Awesome” from The Lego Movie at the ceremony in 2015. The Lonely Island claim to have been asked to write a song for the 2018 Oscars, but when they presented the proposed performance, they were told it would be “financially and logistically impossible” to put on. Now, they’re sharing a storyboard of what they had in mind.

A demo of the new song, “Why Not Me?,” was uploaded to YouTube along with accompanying visuals. The song would have supposedly been performed by actors who weren’t nominated for an Oscar this year, like Tiffany Haddish, Chris Pratt, Chris Rock, and more. At one point, Chris Hemsworth (Thor) and Gal Gadot (Wonder Woman) sing: “We both face death it’s true/ But at least Lady Bird got into NYU…”

Here’s what the Lonely Island have to say about the song:

Hey everyone,
We were asked to write a song for this year’s Oscars …
Unfortunately, it wasn’t chosen because it was “financially and logistically impossible,” so for fun we thought we’d share the rough storyboards of what would have been a fully shot, star-studded music video of exorbitant cost.

All vocals and visuals are temp, so please use your imagination and enjoy!
– The Lonely Island

Check out the storyboard for “Why Not Me?” below.