In correspondence with March for Our Lives, Fall Out Boy will headline a benefit concert in D.C. on March 23, the night before the scheduled march. Both events hope to raise awareness and money for gun-violence prevention in the wake of last month’s mass shooting at Marjory Stoneman Douglas High School in Parkland, Florida.

Along with Fall Out Boy, the Stay Amped concert will feature G-Eazy, Bebe Rexha, Lizzo and other unannounced surprise guests.

“This is a time for action. We need to support the Parkland teens, and kids across the country,” Fall Out Boy’s Pete Wentz said. “We have their backs, and we must demand our lawmakers do more to end this gun violence crisis.”

Proceeds from the concert will go to two anti-gun-violence organizations: Everytown for Gun Safety and Giffords: Courage to Fight Gun Violence. Gabrielle Giffords is a former congresswoman who was shot in an attempted assassination in 2011 and has been advocating for stricter gun laws since, and Everytown is the largest gun-violence prevention organization in the United States. 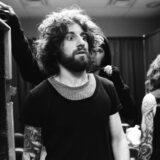 “Music brings people together, fuels our energy and offers us inspiration. It’s for those reasons music played such an important role in my recovery,” Giffords said. “I’m thrilled that the night before students take to the streets to march in communities across the country, this concert will provide an opportunity for us to gather and show support for the activism of young people and to encourage them to stay loud as they demand a safer future.”

The concert will be followed by the march the next day, organized by the Parkland students, who have gained traction and garnered praise in their outspoken fight for stricter gun laws. While the flagship march will happen in D.C., there will also be more than 600 sibling marches taking place across the country. George and Amal Clooney have been joined by Oprah and fashion house Gucci in donating $500,000 to the cause. Celebrities like Harry Styles, Justin Bieber and Jimmy Fallon have all also voiced their support for the movement.

Tickets for the benefit concert will go on sale at 10 a.m. ET on Wednesday at ticketfly.com.