This story originally appeared in the February 1993 issue of SPIN, which was partially written and guest-edited by members of the SNL cast. Read interviews and stories from comedy icons of the era–Chris Rock, Adam Sandler, Tim Meadows, Julia Sweeney and others–in our package of highlighted stories from the issue.

The first Saturday Night Live I ever saw was when Dick Cavett hosted during the premiere season. I came home – I was working as a bell man at the Hilton hotel in Oakland – and I remember saying to myself, “What the hell is this?!” When it first came on it was this sensation, because it was so unlike all the rest of television. There was no place on TV to find that kind of material – anything that was at all hip, current, counterculture. It was 1975, it was before cable, it was before the VCR cost less than 5,000 bucks. The hippest, most irreverent comedy thing on TV around then was what? You tell me. Sanford and Son? I remember sitting down watching Saturday Night and thinking, “Man, this is something else!”

There were those early years that Steve Martin was on the premiere episodes – that was the big stuff. You watched it with your friends in a group experience. You planned on being somewhere at 20 minutes after 11:00 so you’d be prepared. Then there were the middle years it was still on just because it was SNL and it had to be on. Even so, it went through a number of growth spurts, driven by the personalities that the show was lucky enough to get – Billy Crystal, Marty Short, and Eddie Murphy. It still had that kind of atmosphere that you could sit back and marvel at. Guys like Harry Shearer and Christopher Guest, even though they didn’t thunder to popularity, did some incredibly subtle and diverse work during that period.

When Lorne Michaels came back as producer in 1985, the nature of television had changed so much – by then there were 800 cable channels. It ends up being this whole different thing now, because a lot of the shock factor is gone. I mean, we can see tits on TV now at 11:30 at night, so it’s no longer shaking social totems as much. But the niche that it fills and still fills now is that there is still nothing else like it on television. You end up getting this great texture – I can’t think of any other word – as far as its unique ability to be absolutely current and irreverent as well. 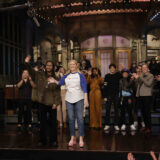 The first time I guest-hosted was the first season Lorne came back. Randy Quaid was on the show, Robert Downey Jr. was on, Anthony Michael Hall was a player but was off doing some job. I remember it was in December, because the first Monday meeting was when they lit the Christmas tree at Rockefeller Center. I’ll tell you, there’s no more exciting place to be than behind that door, back behind the band, as they’re rolling through the opening credits and you’re getting ready to go out. I’ve done the show six times now. That moment still gets me excited and makes me want to puke at the same time.

It’s not the actual broadcast that’s the most fun. I like being there on Monday for the first meeting and then hanging out with everybody on Tuesday and Wednesday. I like the countdown to the Wednesday read-through. I like staying up late and eating bad food. There’s also this grand – well, I don’t know if grand is the word – there’s also this kind of tawdry history to the place. There’s garbage in the corners of the 17th floor that hasn’t been cleaned up since the first time I did the show and it’s kind of just lying around: busted electric pencil sharpeners, TVs with no knobs, things like that.

The reason I keep going back is that, in all honesty, it’s the only experience like it on the planet Earth. Certainly because it’s live, but that’s really the smallest part of it. The fact that it’s 90 minutes long is another big part – you’re not just showing up and doing one thing. In the course of the show, a lot is expected of everybody, particularly the host. There’s no other workout like that in show business, especially one that’s disposable. You’ve got to throw it away on Sunday morning, and those guys have to go and start all over again. Every time I’ve done a show, come Sunday or Monday, it’s been like, “Oh man, jeez, last week I was the guy doing the show and now I’m the guy not doing the show.” It always comes to this postcreative depression. If you don’t do so great, the postmortem is always devastating too.

When something happens in the world during the week, you still automatically think, “Man, I wonder what Saturday Night Live‘s gonna do about this.” A lot more people probably watch it now than ever. It still has this kind of cachet to it, like, “Hey, who’s hosting Saturday Night this week?”