Porches frontman Aaron Maine has responded to controversy surrounding a recent profile of the musician in Out magazine. In the article (titled “Porches’ Aaron Maine is Embracing His Queer, Suburban Sensuality”), the writer suggests that Maine’s painted nails and spaghetti strap blouses give his music resonance in LGBTQ circles, with queer fans able to “lose themselves” in “this sense of self-isolation.”

“For many of his fans, the news of his heterosexuality may admittedly come as a surprise,” Chris Thomas writes in the profile. “But on his social media feeds, you’re just as likely to see Maine with painted nails or wearing a spaghetti strap blouse for a Vogue shoot as you are to see him lying about with his girlfriend.”

After accusations of “posturing as queer for capital gain” have circled on social media, Maine responded today with a series of photos on Instagram Stories, where the musician voiced his frustration with the way the feature framed things. “I’ve been hesitant to talk about having any relationship with queerness because it seems cache, especially now with the way media directs attention and frames straight presenting people as gender queer or fluid,” he writes. The statement continues:

“A lot of the aesthetic choices I’ve made in the past were overlooked and I was assumed to be queer, that I was playing or appropriating queer culture. I’m interested in queerness but mainly performance; Porches has been a platform for me to explore who I am and have myself reflected back to me since I stared the project almost ten years ago. It was a space for me to work through things I felt internally but only more recently felt comfortable enough to embody and physically portray.”

Read the full statement below: 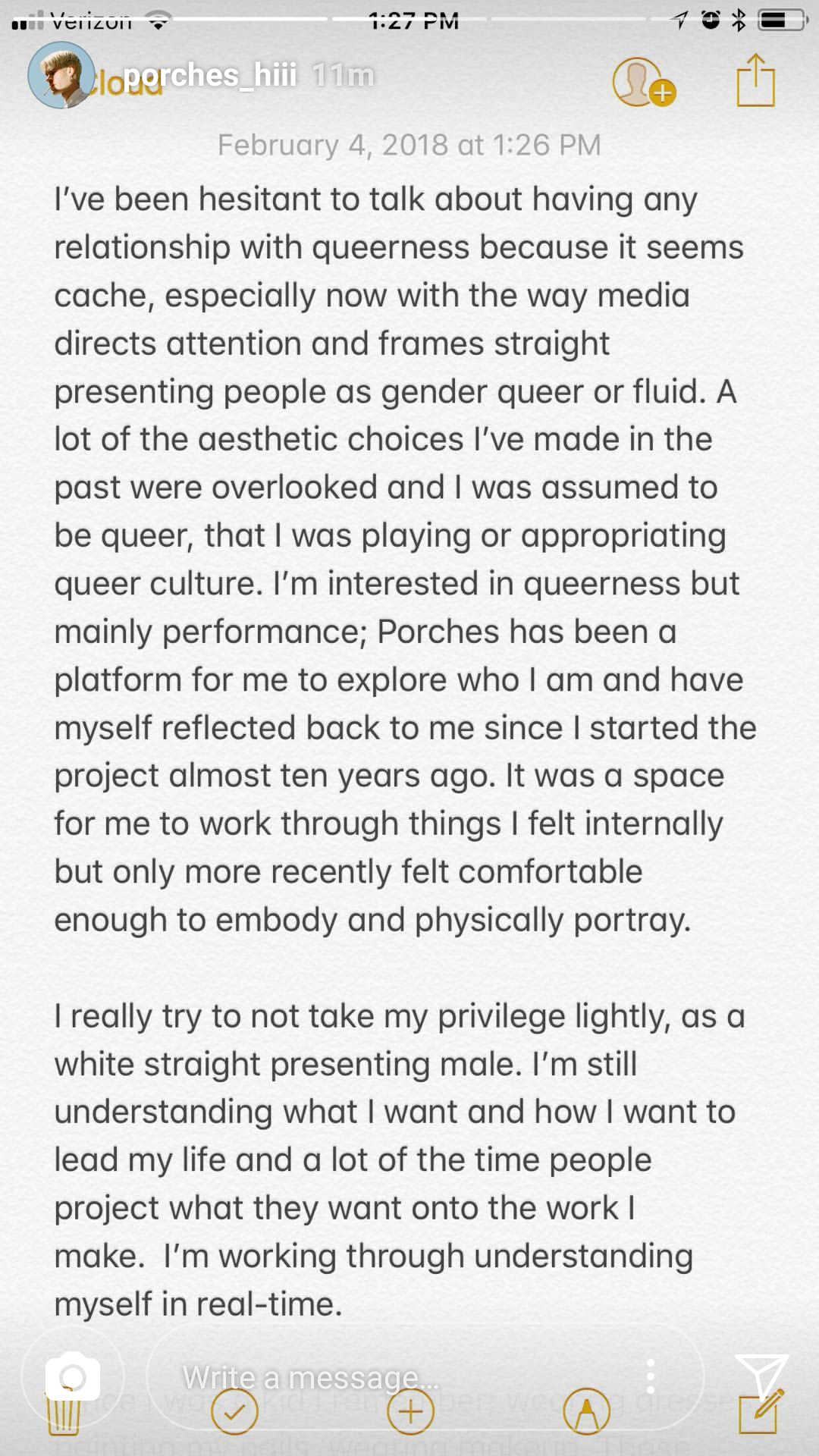 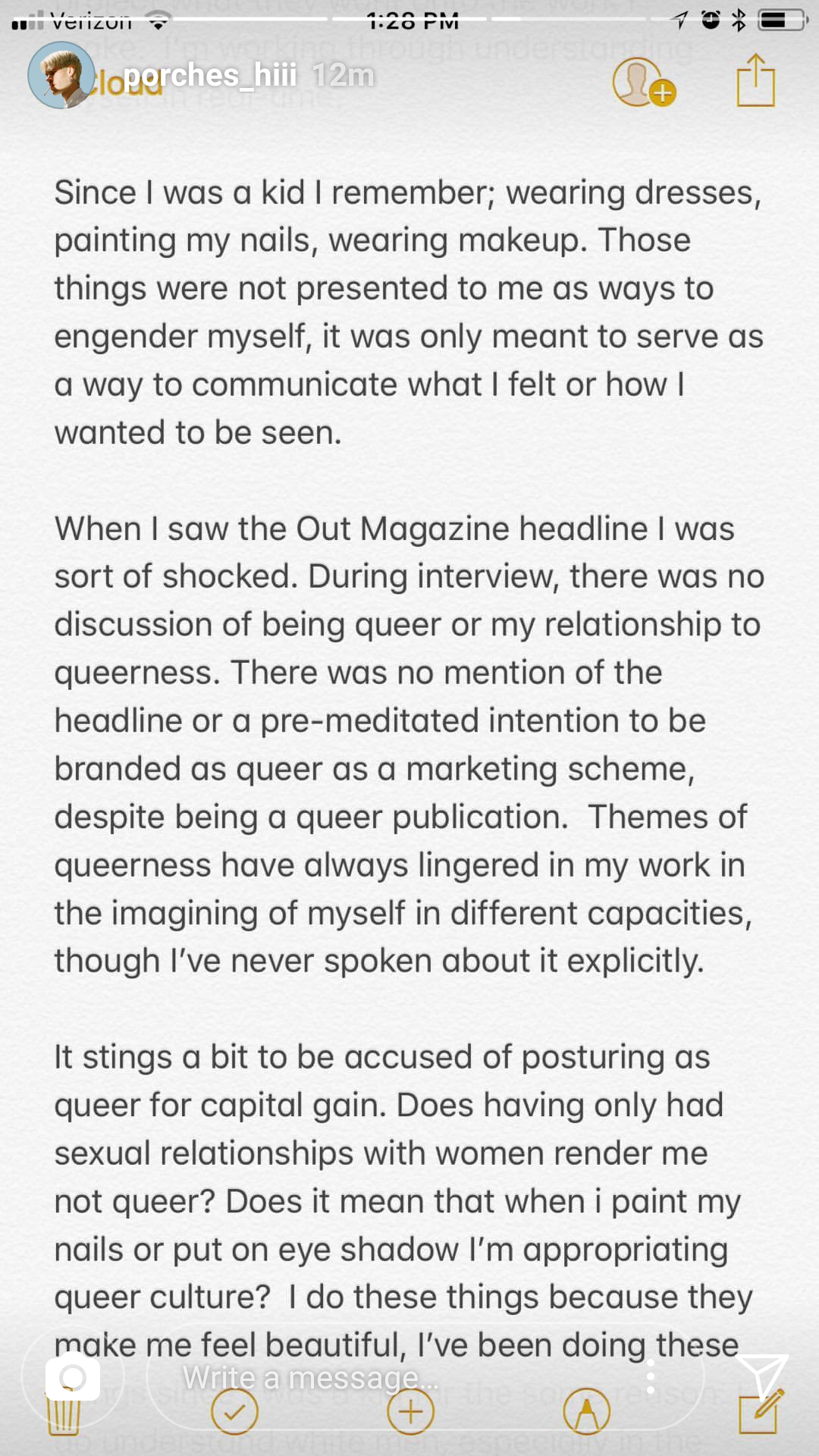 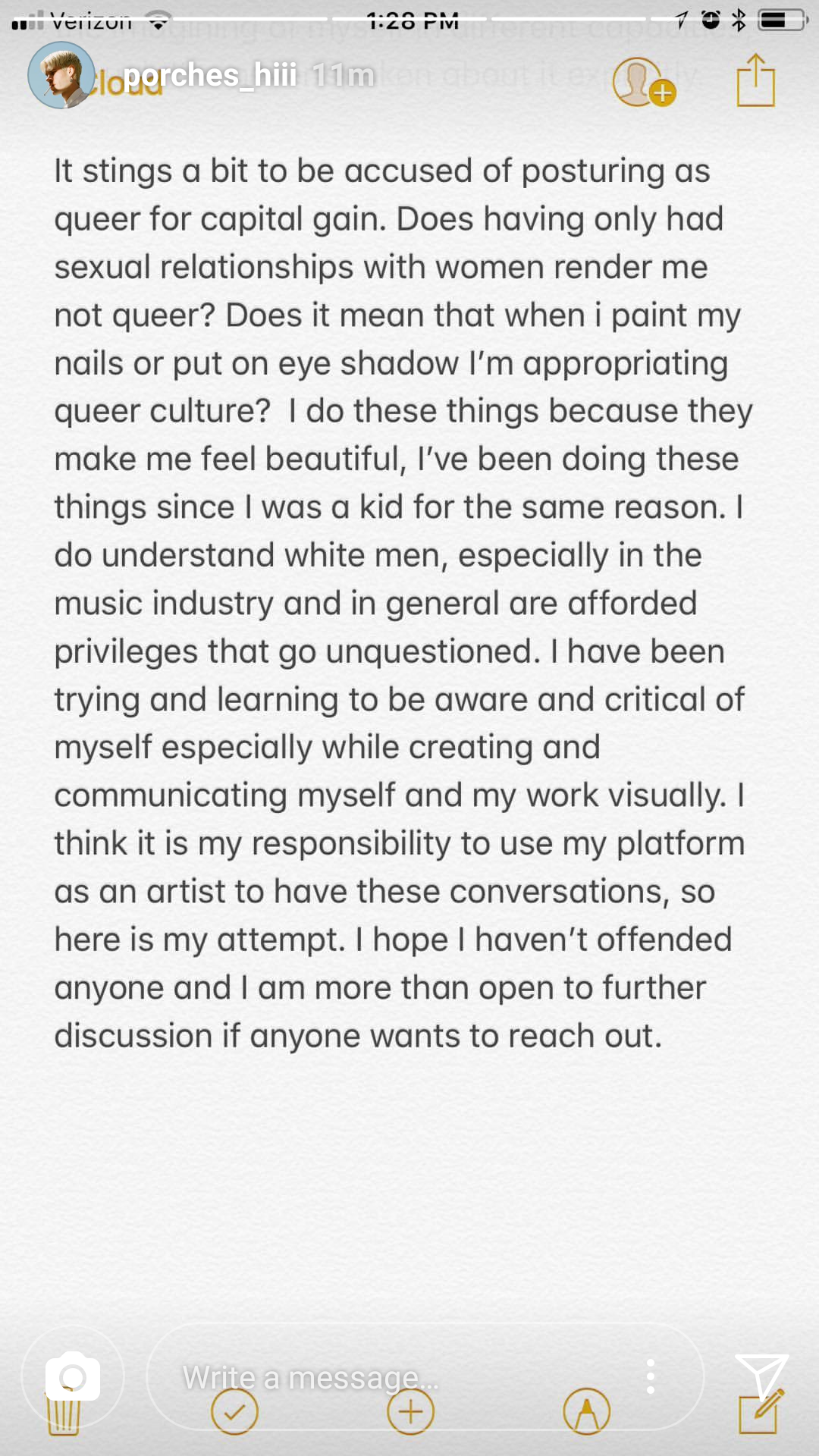 Update (7:45 PM EST): Out has updated the quoted portion of their feature for clarity. The quoted paragraph now reads:

“While he’s often lounging around with painted nails or wearing a spaghetti strap blouse for a Vogue shoot with his girlfriend, singer and model Kaya Wilkins, he’s careful to “try to stay in [his] lane” when it comes to his identity as he shifts towards a more suburban sensuality for the music videos for “Country and “Find Me” he’s created alongside collaborator Nick Harwood, whose resume includes the likes of Sophie and Kim Petras.”

Read an updated version of the interview here.

Update (12:45 AM EST): Out has added a preface to the feature that outlines some of the concerns brought to their attention. In the statement, the publication expresses “the tricky issues our readers are concerned about regarding who gets to claim queerness as an identity.” “We don’t take these issues lightly and, with that said, we feel we did the subject a disservice by misrepresenting his position through unfairly editorializing his words and attaching queerness to his identity in both the text and headline of the interview, rather than letting him speak for himself,” the statement reads. It continues:

Note: Our readers have expressed many concerns and frustrations about the topics of queerness and queer identity as represented in this article. We sincerely apologize for delegitimizing the lived experience of anyone in the LGBTQ community and understand the tricky issues our readers are concerned about regarding who gets to claim queerness as an identity and why some self-identifying straight musicians have queer followings. We hear your concerns about how artists can practice allyship with the community and whether true allyship is possible without appropriation or delegitimization.

We don’t take these issues lightly and, with that said, we feel we did the subject a disservice by misrepresenting his position through unfairly editorializing his words and attaching queerness to his identity in both the text and headline of the interview, rather than letting him speak for himself. It mistakenly insinuated that queerness might somehow be reduced or essentialized to performance, like nail polish or wearing blouses. This created a harmful and problematic editorial slant that misconstrued the narrative of the interview and did a disservice to the subject and our readers.

We’ve edited the piece from its original version accordingly and thank you for your feedback.

An updated version of their feature can be found here.