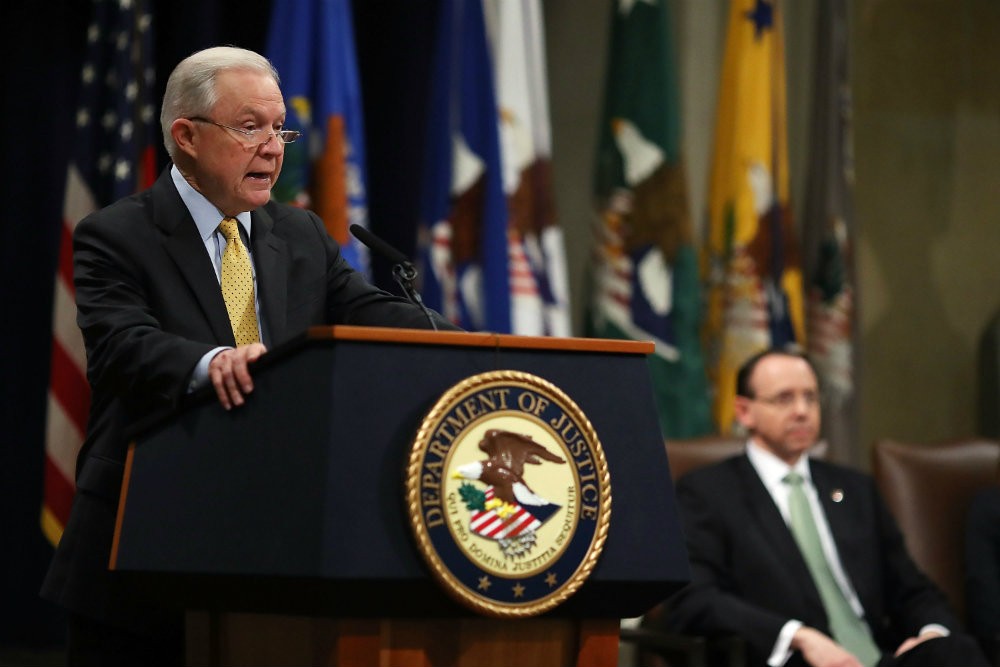 Attorney General Jeff Sessions raised eyebrows while praising the “Anglo-American heritage of law enforcement” during a speech to the National Sheriffs’ Association on Monday.

“I want to thank every sheriff in America. Since our founding, the independently elected sheriff has been the people’s protector, who keeps law enforcement close to and accountable to people through the elected process,” Sessions said.  “The office of sheriff is a critical part of the Anglo-American heritage of law enforcement. We must never erode this historic office.”

“The office of Sheriff is a critical part of the Anglo-American heritage of law enforcement. We must never erode this historic office” : Attorney General Jeff Sessions speaking at the National Sheriff’s Association winter conference in DC. @vicenews pic.twitter.com/gPS6AbkS30

Invoking the great “Anglo-American heritage” of cops appears to be some improv on Sessions’s part. According to CNN, the attorney general’s written statement contained the line: “The sheriff is a critical part of our legal heritage.” Was this moment a slip of the tongue? A rare instance where Sessions said exactly what was on his mind? The unfortunate byproduct of an irrepressible impulse to say the quiet part out loud?  Not if you ask the Department of Justice.

“As most law students learn in the first week of their first year, Anglo-American law — also known as the common law — is a shared legal heritage between England and America. The sheriff is unique to that shared legal heritage,” DOJ spox Ian Prior said in a statement. “Before reporters sloppily imply nefarious meaning behind the term, we would suggest that they read any number of the Supreme Court opinions that use the term. Or they could simply put ‘Anglo-American law’ into Google.”

As Vice News reporter Tess Owen pointed out, Sessions referenced the “Anglo-American” tradition while praising the late Justice Antonin Scalia during a speech at last week’s Reagan Alumni Association’s Celebration of President Reagan’s Birthday. It’s worth noting, however, that Sessions ad-libbed meandered from his prepared remarks and tossed the term in when speaking to a broader audience, especially given how part of his speech was praising sheriffs for assisting the Trump administrations enforce its illegal immigration crackdown.

Given that Sessions was once deemed too racist for a federal judgeship under Reagan, it’s not crazy to assume that the attorney general was applauding sheriffs for bolstering whiteness or white “heritage” in law enforcement, especially when he could have stayed on a script that left much less to interpretation.