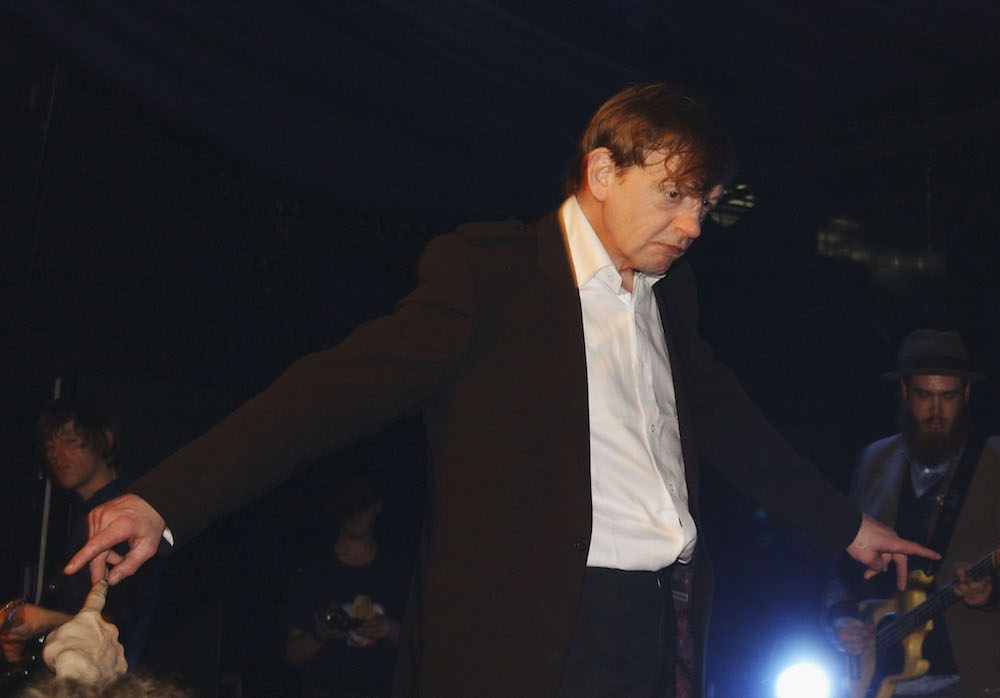 Mark E. Smith is an odd person. Extremely odd. Very shifty. Very clever. The afternoon he meets me in London it looks like he’s just cut himself shaving. Six or eight times. It’s difficult to look directly at him. He reeks of beer. He’s chain-smoking. He looks more like a dock worker than a former dock worker who’s been an iconoclastic rock icon for 16 years. Several conspiracies seem to be transpiring around him at any given moment. But not to worry. The Fall frontman is perpetually in control.

“There’s all these guys with spectacles on,” he mumbles in his unmistakable Mancunian accent. “Creeping’ around. I’ve seen ‘em. They’re like the CIA. Nobody can tell me I’m wrong about this. I fuckin’ know it.”

Smith is venting bitter insights into the generic, mega-corporate state of America’s record industry—a clichéd subject, but one that’s weighed heavily on Smith’s mind since his search for a U.S. home for his band. The Infotainment Scan on Matador/Atlantic is the first Fall album to be released in America since 1989’s Extricate.

“Our last two LPs were like ‘Import of the Year’ or fuckin’ ‘Student LP of the Year’ in the States. But the record company chose to just give us money rather than release ‘em. Didn’t like ‘em. It’s so tedious. Morons, you know.”

When Smith speaks, he sounds just like his songs. Disjointed. Cryptic. Full of contempt for the status quo. Razor-sharp sense of humor and irony. Over dinner he’s more interested in hearing about the cruise my roommate’s presently on than discussing The Infotainment Scan. (“Tell me more about this, ah, singles-ah cruise-ah!” he howls, picking up my last piece of liver with his hands and tossing his dirty napkin into my plate. I can almost see the song brewing in his head—full of sardonic pity for the sods on the ship.) But eventually, after hesitantly whispering an incomprehensible story about some long-ago, shady, spy-like confrontations with the abandoned Czech Embassy across the street—then unsuccessfully attempting to erase it from my tape recorder by rewinding it and tapping on it with a fork—he gets to the concepts behind the new album. Something about too many police shows on TV and an overabundance of retro rock.

“Very easy media out there,” he explains. “Somebody’s gotta monitor it.” (“You can smile at me all you want,” he murmurs when he catches my unintentional grin. “I know I’m fuckin’ right.”) “I’m a lucky man. I have an avenue to say things. Not like the other fuckers. I have deep contempt for guys like Costello, McCartney, Bowie. I’m very sorry. No offense meant personally. That’s why the Fall was formed. When I’ve got nothin’ else to say, I’ll fuckin’ pack it in.”

Mark E. Smith’s Cause of Death Announced by Family