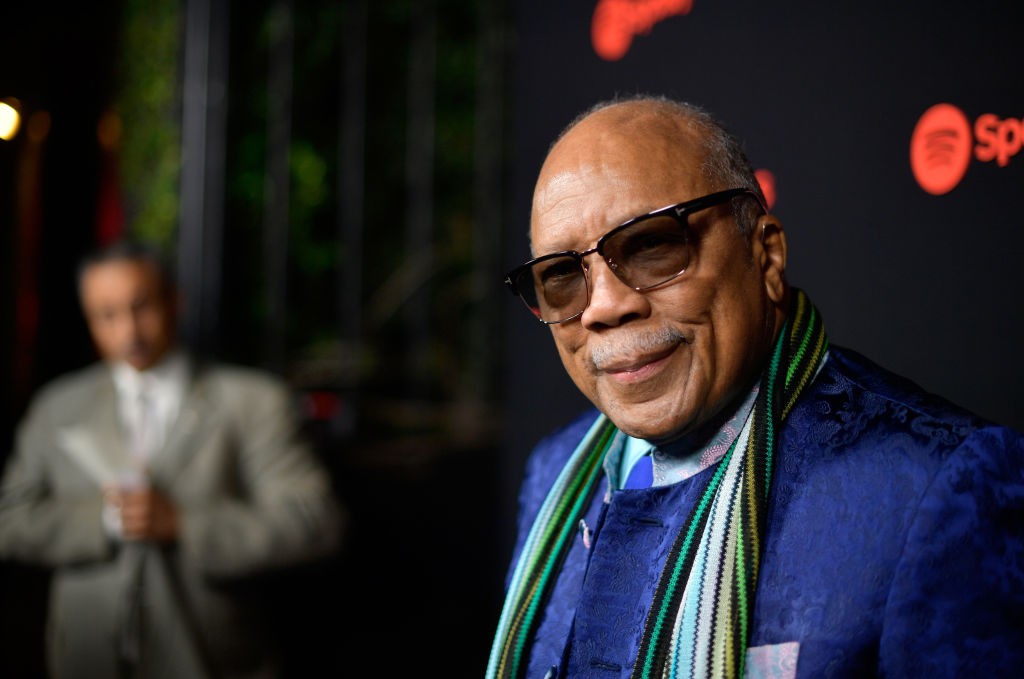 The new GQ super-interview with Quincy Jones is among the most batshit crazy and troublingly wonderful things I have read in some time, and a masterpiece of modern journalism. Clocking in at over 10,000 words, and full of anecdotes you’ll need to pore over multiple times to process, the piece must be read to be believed. But here is just a sampling of some of the historically vital information you will glean from this conversation with the 84-year-old industry mega-heavyweight and producer:

Prince once gave Michael Jackson a box full of crap including “cuff links with some Tootsie Rolls on them.”

Jones once tried to arrange a collaboration between Prince and Michael Jackson (who Jones liked to call “Smelly”) for Jackson’s Bad album. Jones remembers a meeting gone awry at Jackson’s place in Hayvenhurst. It was definitely not at Prince’s house near Minneapolis, which MJ pronounced “Minnenapolis,” to Prince’s extreme chagrin. Prince brought Michael a strange gift box filled with things like that” addressed to “Camille,” which was Prince’s pet name for Michael.

“Michael was scared to death—he thought there was some voodoo in there,” Jones said. “I wanted to take it, because I knew Michael was gonna throw it away.” He did, in fact, end up throwing it away.

At the same gathering, Jones also said that Prince told Janet Jackson to “relax your lips, girl.” Another source of contention in the two icons’ relationship was a joint performance with James Brown in 1983 in L.A., during which Prince embarrassed himself by “nearly tumbl[ing] into the audience trying to pull down an oversize streetlamp prop” while shirtless.

Jones claims to have seen Ray Charles shooting heroin into his balls.

According to Jones, no one partied harder than Frank Sinatra and Ray Charles, and it seems as if they were the two men that taught Jones how to do so himself. After speaking reverently about good times he had with Charles, Jones spoke about the dark side of the R&B legend’s drug use: “He went 30 years with heroin, and then the police told him he couldn’t get his license to play clubs unless he stops…I’ve seen him shooting in his testicles, man…He had a guy do it. It was horrible.”

Jones used to eat fish with the Picasso family, who he lived next to in France in the late ’50s.

Jones: “…they used to live next door to us in Cannes in 1957. Jacqueline and Picasso. We had lunch with him. He was a character, man. He was fucked-up with absinthe all the time. We both ordered sole meunière, which is one of my favorite dishes of all time from Paris, and after he’d finish he’d take the bones and push it out in the sun and let the sun parch the bones, and he’d take out these three colors, orange and blue and red, and when the waiter would say, ‘L’addition, s’il vous plaît,’ Picasso would push that. And you look all across the walls, his bones with his writing on them. That’s how he paid his bills. He was a bad motherfucker, man.”

“[Sinatra] was always trying to hook me up with Marilyn Monroe, but Marilyn Monroe had a chest that looked like pears, man.” When asked if he had really turned down the opportunity to date Monroe, Jones changed the subject: “Let’s not talk about it. Come on, man. We killed it.”

Jones was friends with one-time Nazi propaganda filmmaker Leni Riefenstahl, who told him that cocaine use was rampant among the Third Reich leadership.

Jones was apparently a huge fan of Riefenstahl, most famous for directing the influential and infamous propaganda film Triumph of the Will. When Jones had lunch with her, she discussed being “Goebbels’ girlfriend,” as Jones put it, and claimed that “everybody in the Third Reich was on cocaine.”

Here’s Jones on Hitler’s cocaine use: “Well, shit, the history proves how it affected him. He killed every motherfucker he could see.” Jones also defended his respect for Riefenstahl’s craft, specifying that “she never got passionate about what the Third Reich was doing. She wasn’t into it. I could tell. You have to read between the lines, too.”

Jones said he narrowly missed being at the party at Sharon Tate’s house where the Manson murders occurred.

After Steve McQueen, Jones, and Jones’ hairdresser friend Jay Sebring attended a screening of Bullitt at McQueen’s request (!), Sebring and Jones agreed to meet back up at Tate’s house for a party later. Jones claims to have forgotten, and the next day, his friend Bill Cosby called him to tell him about Sebring’s death in the Manson killings. “It’s just unbelievable, man,” Jones said. “You feel blessed that somehow you forgot, or whatever. Jesus Christ. Ain’t never forget that. That’s the Ghetto Gump shit. Life is a trip, man. Life is a trip.” (“Ghetto Gump” is Jones’ way of referring to people’s comparison of his cultural “omnipresence” to the character of Forrest Gump.)

All this is–I kid you not–only the very tip of the iceberg in this remarkable tome of a piece. Jones quotes one of his personal axioms at one point in the interview: “Je ne regrette rien de tout. I don’t regret shit.” It’s hard to believe quite everything Jones says in this interview, but that comment, at least, certainly seems like the truth. Read the rest at GQ.