Prophets of Rage Depress the Hell Out of Me

Home » News » Prophets of Rage Depress the Hell Out of Me

Prophets of Rage would like you to join the revolution. To help you along, they’re offering an official Prophets of Rage Revolution Starter Letter, filled with tips and calls to action about joining a union and starting a band. “Friends, fans, comrades, Prophets of Rage welcomes you to The Resistance!” it reads in part. “Here are some party supplies for fighting the power.” At least I think that’s what it says. There’s a barely legible lo-res PNG of the letter on the Prophets’ website, but to really read it, you’ll need to pay $9.99 to have it printed on 11×17 paper–presumably some sort of extremely high-quality parchment–and delivered to your doorstep. Limited Edition–going fast!

The letter, with its bald commodification of solidarity and struggle, is a useful emblem for the band. Comprised of the former instrumentalists of Rage Against the Machine, plus the Chuck D of Public Enemy and B-Real of Cypress Hill on vocals, Prophets of Rage have spent the last year touring arenas, nightclubs, and festivals, playing the hits by their former bands as well as new original songs with names like “Radical Eyes” and “Legalize Me.” They released a self-titled full-length, complete with raised-fist art from street art millionaire Shepard Fairey, in September. These are alumni of two of the greatest popular protest music groups in American history (B-Real has always felt like the odd man out), and they convened in an era of terrifying political strife, in response to a president who wants to be a dictator. Why has their existence been such a sad spectacle so far?

You might start with their performance at the Jimmy Kimmel Live Mercedes-Benz Concert Series last night, surrounded by huge three-pointed hood ornaments that provided an ugly and unintentional visual parallel to the Communist red stars on their amps. Rage Against the Machine drew more than their fair share of corporate cash in their day, but they were always the foxes in the proverbial henhouse, using their status as major-label signees to pull off genuinely inspiring acts of subversion. The played the anti-imperialist anthem “Sleep Now in the Fire” on Wall Street without a permit for the music video, briefly forcing the New York Stock Exchange to shut its gates when a throng of fans attempted to storm inside; when the same video was nominated for an MTV VMA, bassist Tim Commerford disrupted the ceremony with a bizarre attempt to destroy the stage set. On Kimmel last night, the Prophets rocked out politely, giving a spirited show full of headbangs and foot stomps but never conveying any real danger. B-Real, surprisingly, was the sole minor exception, openly waving a blunt around hours after Jeff Sessions declared his intent to wage federal war against states that have legalized pot.

None of this would matter quite as much if the songs were any good. But Tom Morello and company have grown weirdly conservative–musically speaking, at least. Rage’s blend of metal, punk, funk, and hip-hop was revolutionary for its time, and the band pushed itself forward with each album, whether it was Morello turning his guitar into a laser-guided noise missile on The Battle of Los Angeles or the band gleefully bastardizing classic songs by Bruce Springsteen and Rakim on Renegades. Now, they sound like they’re attempting to reverse engineer their once-radical sound. Nearly all of the songs on Prophets of Rage follow some variation of the same formula: a hulking riff to start; a lightly funky rapped verse; a shout-along chorus, maybe with the intro riff again, maybe a slightly different one. When the band does venture slightly out of its comfort zone, like when B-Real attempts something like rock singing on “Legalize Me,” the results are even worse. 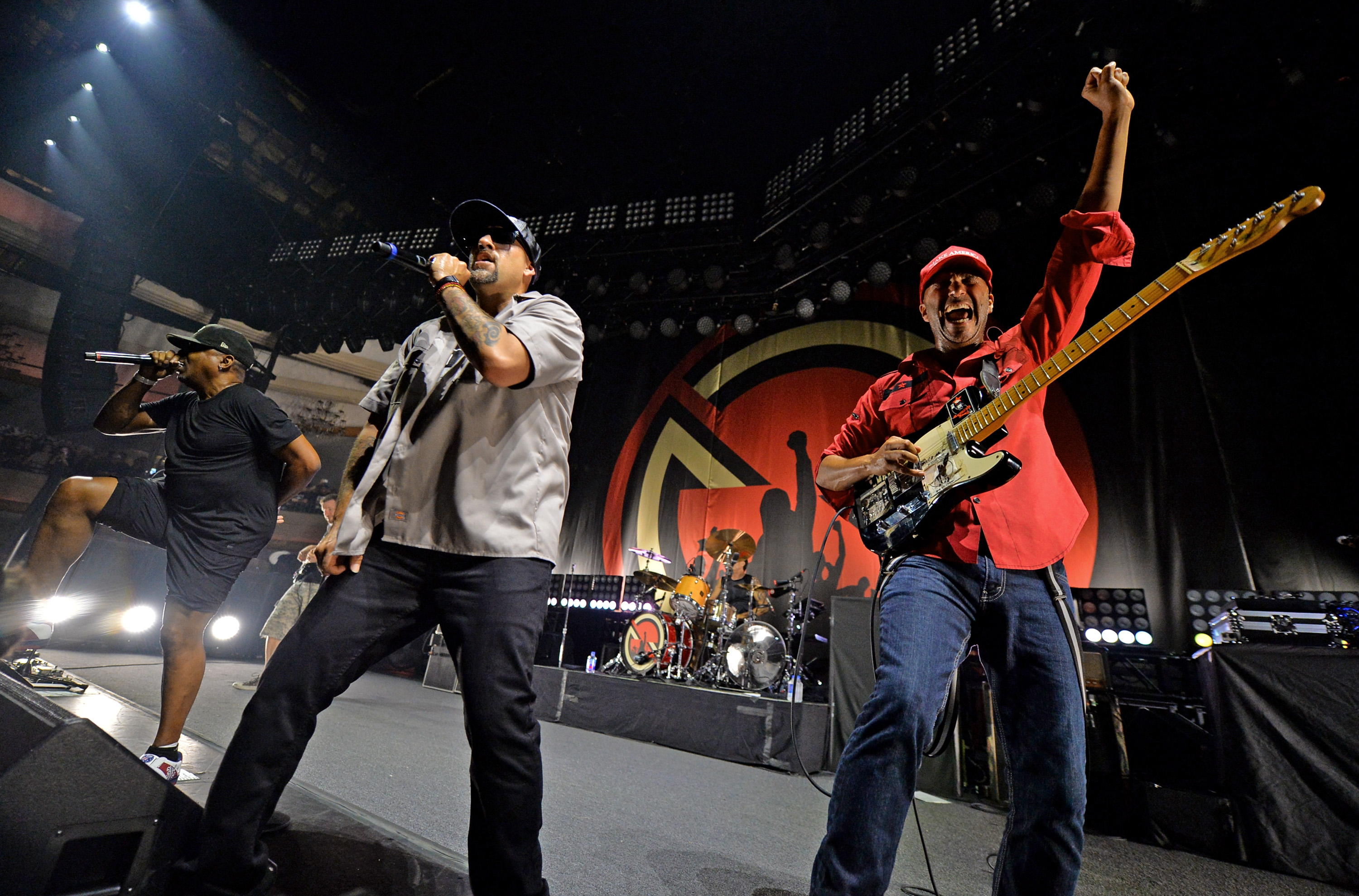 Fortunately, Chuck D has lost none of his booming authority, but both he and B-Real face the same hurdle that plenty of political artists have stumbled over in the Trump era. Great art provokes and challenges the assumptions of its audience, and the president is so thoroughly and obviously repulsive that it’s difficult to address him without resorting to cliche. Chuck isn’t wrong when he says that “Politicians spew lie after fuckin’ lie” on “Unfuck the World,” but is there a single Prophets of Rage fan who doesn’t understand that already?

Of course, no one goes to a Prophets of Rage show to hear “Unfuck the World”; they go to hear “Killing in the Name” and “Fight the Power.” I have no doubt that the band brings the noise when it plays the old hits, and the visceral thrill of shouting “Fuck you I won’t do what you tell me” along with the rest of the crowd might even be enough to momentarily forget that you’re watching a group of middle-aged men rehashing their past glories.

Rage Against the Machine’s original run roughly coincided with the presidency of Bill Clinton. And though their stated politics were far to the left of the president’s, as proud socialists signed to a subsidiary of Sony, they evidently shared his conviction that well-meaning progressives could enter an uneasy alliance with powerful corporate interests and make the world a better place. But two decades later–after a financial crisis helped along by Clinton’s program of deregulation and the rise of an autocrat who pandered to the fears of those left out in the cold–it’s no longer so clear that rich people can save us, no matter how good their intentions are. If we’re really going to have a revolution, the soundtrack will need to be a lot more radical than a nostalgia tour.