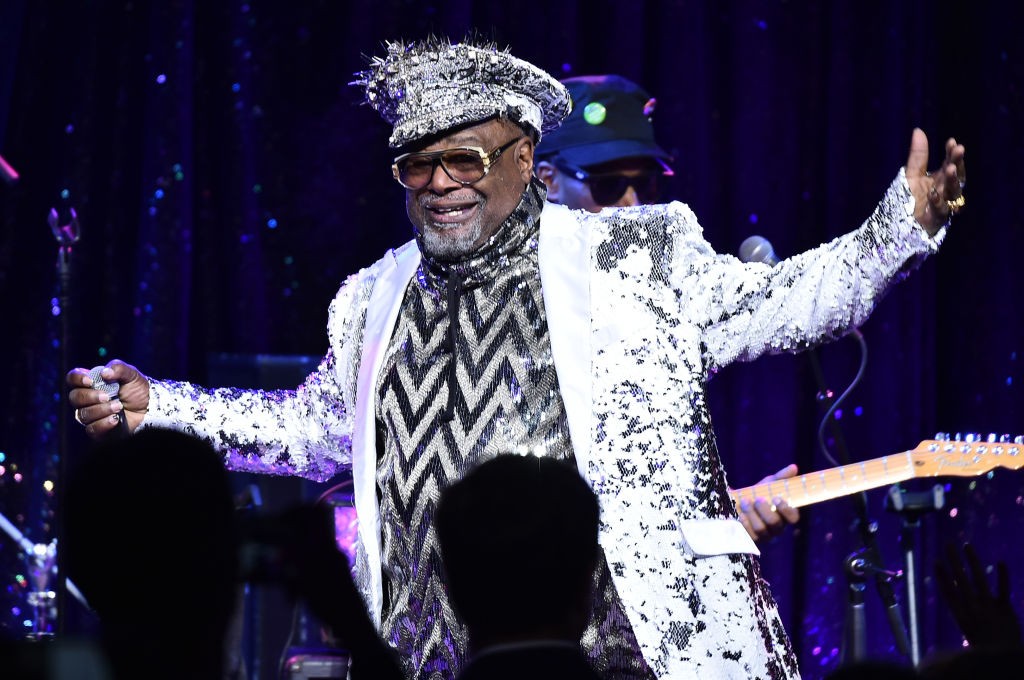 To promote the release, Clinton did an AMA on Reddit, in which he discussed a forthcoming Parliament album called Medicaid Fraud Dog. “It’s Parliament’s turn,” he said. Clinton also shared his drug of choice (“the chronic”), which current artists he’s listening to (including Flying Lotus, Cardi B, and “all that shit coming out of Atlanta”), and his true home (“the planet Sirius better known as the Dogstar”).

I remember the socks they were wearing were too big. I had to buy them some snuffleupagus jock straps.

Clinton also shared a story about seeing a U.F.O. with Bootsy Collins:

We were driving into Toronto together and were contacted by a UFO. We saw a flashing light hit the ground first in front of our car. Three of four minutes later we saw it again two times, hit the street. Then the light hit the car and the light turned to liquid like mercury from a thermometer, beaded up and rolled off the car. All the street lights went out slowly as we passed. We looked behind us it was dark. Bootsy wasn’t scared, he thought I knew what was going on. We weren’t high, because he just crossed the border. We eventually arrived home and walked in the house and my daughter said, you all acting like you just saw a ghost! I didn’t even think about it until later, why were we seeing light in daylight. I had to call Bootsy to confirm what time of day it was. We lost a lot of time that day and didn’t realize it until years later.

Then there’s this anecdote. Asked the craziest thing he’s ever seen at a performance, Clinton said:

Norman, Oklahoma. 1978. A girl came up on the stage in overalls. Dropped her pants to her ankles. Turned around. Put a joint up her butt. And blew three smoke rings. We couldn’t finish the show because we couldn’t stop laugh. We tried 3 or 4 times to continue. Even took a break and we couldn’t stop laughing.

You can read the full AMA here. Listen to the song below.