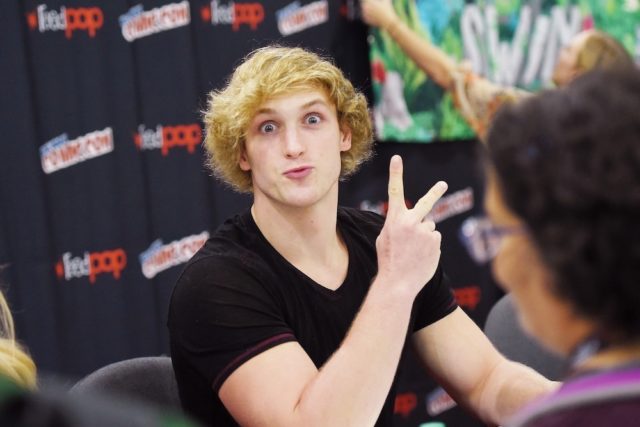 Logan Paul, vlogger and brother of Spin’s “Year in Suck 2017″ honoree Jake Paul, made an early play for “Year in Suck 2018″ when he shared footage of himself posing with what was apparently a dead body in Japan’s Aokigahara “suicide forest.” The now deleted YouTube video, titled “We found a dead body in the Japanese Suicide Forest…,” contained footage of Paul narrating the scene in front of what appeared to be a hanging body with the face blurred out. According to the BBC, the video managed to rack up millions of views before being deleted on Monday night amid widespread outrage on social media.

“This is not clickbait. This is the most real vlog I’ve ever posted to this channel,” Paul says in a brief intro that plays before the forest footage. “I think this definitely marks a moment in YouTube history because I’m pretty sure this has never hopefully happened to anyone on YouTube ever…Now with that said: Buckle the fuck up, because you’re never gonna see a video like this again!”

The 15-minute video was intended to be part of Paul’s “Japan Adventures” series and features Paul cracking jokes about how Mt. Fuji is not the source of Fiji bottled water and generally goofing off with his entourage before encountering a hanging body in a forest that tragically serves as a frequent site where people take their own lives. After discovering the body, Paul called out “Yo, are you alive? Are you fucking with us?”

The answer to both questions was clearly no.

“So, a lot of things are going through my mind. This is a first for me,” Paul said off camera while he or someone from his crew filmed the body. “His hands are purple. He did this this morning.”

“Oh no, I’m so sorry, Logang,” Paul said, referring to his fanbase. “This was supposed to be a fun blog.”

Paul was apparently planning to film some kind of ghost busting spoof in the “haunted” forest and appeared surprised to discover a body in a secluded forest internationally known as a site where people kill themselves.

“Suicide is not a joke,” Paul said. “Depression and mental illness are not a joke. We came here with an intent to focus on the ‘haunted’ aspect of the forest. This obviously just became very real, and obviously a lotta people are going through a lotta shit in their lives.”

The backlash to the video was swift and severe, causing Paul to delete the video in just under 24 hours, according Select All. Among the detractors was Breaking Bad star Aaron Paul (no relation), who told Paul he is “pure trash” and should “go rot in hell.”

How dare you! You disgust me. I can’t believe that so many young people look up to you. So sad. Hopefully this latest video woke them up. You are pure trash. Plain and simple. Suicide is not a joke. Go rot in hell.

The vlogger tried to tweet through it by teasing the next installment of his “Japan Adventures” before finally addressing why his audience might be upset by the exploitation of a suicide victim, in a statement beginning with “Dear Internet”.

“I’m sorry,” Paul wrote in his statement. “This is a first for me. I’ve never faced criticism like this before, because I’ve never made a mistake like this before. I’m surrounded by good people and believe I make good decisions, but I’m still a human being. I can be wrong.”

“I didn’t do it for views. I get views,” Paul said, referring to his over 15 million YouTube subscribers. “I did it because I thought I could make a positive ripple on the internet, not cause a monsoon of negativity. That’s never the intention. I intended to raise awareness for suicide and suicide prevention and while I thought ‘if this video saves just ONE life, it’ll be worth it,’ I was misguided by shock and awe, as portrayed in the video. I still am.”

It’s worth noting that Paul said that he didn’t monetize the initial video and posted contact info for the American Society for Suicide Prevention in its caption, but both the video and the apology still feel gross, especially given how the 22-year-old’s fanbase skews towards teens and children.

UPDATE: On Tuesday morning, Paul shared a video apology with a caption reading “So sorry.”