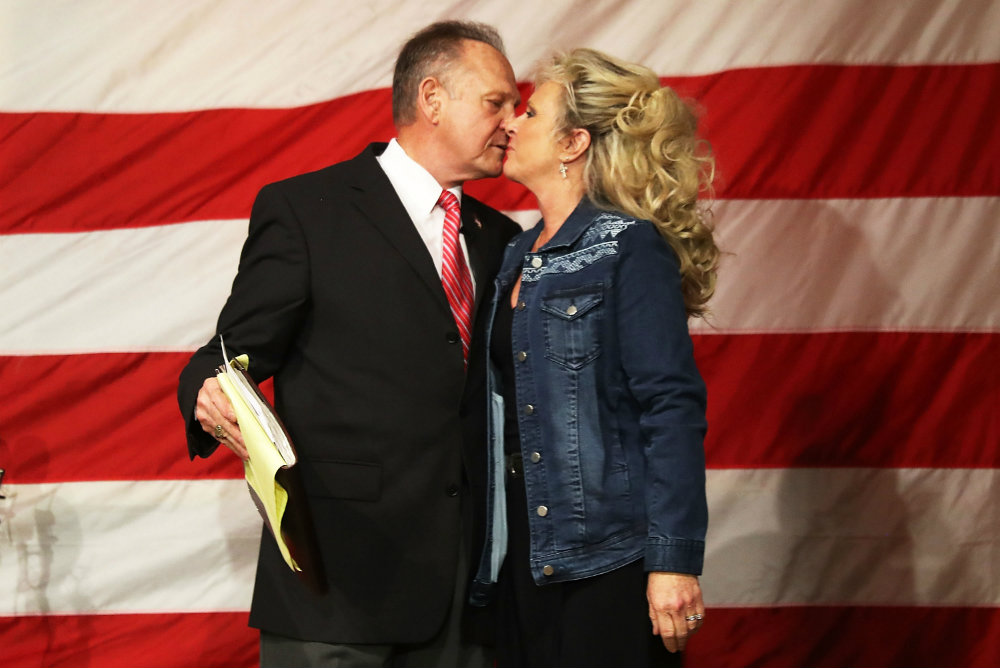 It turns out that Roy and Kayla Moore have hired more than one Jewish lawyer in the fairly recent past. We initially assumed Birmingham defense attorney Richard Jaffe was the person she shouted out from the pre-election night rally. Who can forget her spirited “one of our attorneys is a Jew!” rallying cry when trying to dispel the credible perception that her husband, the now failed GOP Alabama Senate candidate, is a bigot?

Jaffe, an emphatic Doug Jones supporter, is indeed a lawyer, he is Jewish, and he was employed by the Moores to defend their son Caleb on drug charges in 2016. After the Washington Examiner identified Jaffe as the lawyer, Kayla got in touch with AL.com to clarify who she was praising. From AL.com:

Kayla Moore today explained why she made that reference.

“We read where we were against Jews – even calling us Nazis,” she wrote in an email to AL.com. “We have a Jewish lawyer working for us in our firm – Martin Wishnatsky. Judge hired him while Chief Justice, then I hired him at the Foundation.”

Wishnatsky worked as a staff attorney at the Alabama Supreme Court from January 2013 until Moore was removed from office in 2016. Then he went to work as a staff attorney for the Foundation for Moral Law, which was founded by Roy Moore and where Kayla Moore works as president.

According to its website, the Foundation for Moral Law “exists to restore the knowledge of God in law and government and to acknowledge and defend the truth that man is endowed with rights, not by our fellow man, but by God!” Another section of the website affirms that the “God” they are indeed talking about is the Christian God. “We believe that Jesus Christ, the Son of God, died on the cross and rose again to life so that all who believe in Him,” the site’s “Statement of Faith” reads, “by faith, will be forgiven of their sins, and gain eternal life in Heaven. That He ascended to the Father and will come again to judge the living and the dead.”  Wishnatsky falls in line with that mission statement because he became an evangelical Protestant in his ’30s.

“I’m a Messianic Jew,” Wishnatsky told AL.com.  “That’s the term they use for a Jewish person who has accepted Christ.”

Wishnatsky, a fervent anti-abortion activist, refers to people who convert from Judaism and Christianity as both Christians and Jews.

“You’re both,” he said. “You’re a Jewish person that’s accepted Christ. Jesus was a Jew. Most Jews are not religious. That’s how I grew up. There are the Orthodox who are very serious about Judaism. It’s about whether you think God is real, and whether you’re accountable to him. It’s whether you take God seriously. It took me quite a few years to take God seriously.”

It turns out that the Moores’ are proud to associate with Jewish people as long as they are actually Christian.

Roy Moore Is Not Handling His Loss Well, According to His Facebook Page