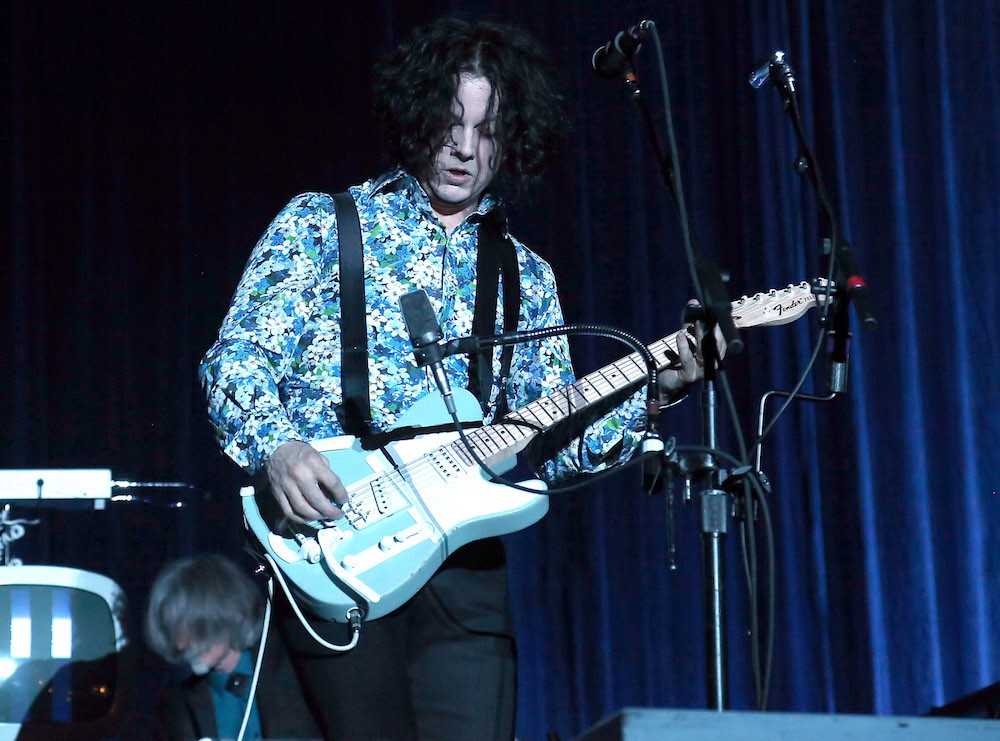 It’s been six years since the White Stripes broke up, but even without the strict color scheme and brother-sister act, Jack White’s personal aesthetic has remained pretty consistent. He likes the blues, he likes simplicity, he likes the electric guitar, he likes antique furniture and handcrafted baseball bats. He’s not really a guy who seems fascinated by the possibilities of technology. So it’s legitimately jarring when, a few seconds into his newly released B-side “Respect Commander,” the drumbeat shifts into electronically-enhanced overdrive, chopped up and reassembled in a manner that clearly involved some clicking and dragging across a digital screen. And that’s not the least of it: soon after, there’s the kind of canned orchestral hit that resides deep in the presets section of just about every keyboard sold in the late ’80s and ’90s, followed by a synth line that sounds like a laser beam. Taken together, the intro to “Respect Commander” leads to one uncomfortable, inescapable question: my god, has Jack White been listening to Art of Noise?

After years of borderline-fetishistic retro rock’n’roll, Jack White may finally be embracing electronic music. But don’t mistake “Respect Commander” and its A-side “Connected by Love” (both of them from his forthcoming third solo album Boarding House Reach) for stabs at sounding contemporary. Both songs incorporate synths fairly heavily, but this is still vintage equipment we’re talking about, or a convincing emulation of it. “Connected by Love” is a ballad with gospel backing vocals and a fat analog sound that places it in some alternate-universe version of the 1970s; “Respect Commander” is a frantic collage that harkens to the early days of sampling, with the feel of classic hip-hop production teams like the Bomb Squad and the Dust Brothers in addition to the guys who wrote “Moments in Love.” These new songs don’t break White out of the past; they just move the reference points forward by a few decades.

In the case of  “Connected by Love,” if you were to get rid of the synth and replace it with blocky piano chords, it wouldn’t sound much different from a White Stripes tune like “I’m Lonely (But I Ain’t That Lonely Yet).” But while that song achieved pathos through understatement and subtle humor, “Connected by Love” is earnest in sentiment and overblown in arrangement. “Respect Commander” is much more interesting. There’s still plenty of Jack White there: the intro is anchored by a familiarly sleazy guitar riff, and when the chaos finally subsides halfway through the song, it settles into something like a slow blues shuffle. Almost everything else about the song is baffling in a way that may alienate some fans, but potentially exciting to those of us who think the old shtick is a little tired. Most importantly, after his occasionally torpid second solo album Lazaretto, on “Respect Commander,” White sounds like he’s having fun again.