After releasing the second chapter of their new EP trilogy How to Solve Our Human Problems last Friday, intrepid indie-pop stars Belle and Sebastian have announced a run of U.S. tour dates for this June. The American leg of their 2018 world tour launches June 5 at the State Theatre in Portland, Maine, and closes June 30 at the Oregon Zoo Amphitheater in Portland, Oregon (where everyone deserves their money back if they haven’t heard 2006 deep cut “The Monkeys Are Breaking Out the Zoo”). Opening acts include Snail Mail (June 5-6), Perfume Genius and Frankie Cosmos (June 8 in New York City only), Men I Trust (June 9-11 and 16-17), and Japanese Breakfast (June 10-30).

Belle and Sebastian last visited the U.S. in summer 2017, when they played a handful of dates and accidentally abandoned drummer Richard Colburn at a North Dakota Wal-Mart. Check out all of the band’s upcoming 2018 tour dates below. Newly announced U.S. dates are in bold at the bottom. Tickets are on sale at 10 a.m. this Friday, January 26, or tomorrow via the band’s website, and $1 from each ticket sold benefits White Helmets volunteers in Syria. 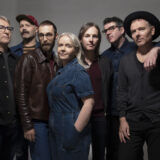