The United Nations High Commissioner for Human Rights will award the inaugural High Note Music Prize next year to a major recording artist in recognition of outstanding contributions to humanity and the promotion of human rights through music.

The High Note Music Prize selection committee, which is in the process of being assembled, will work with the Office of the High Commissioner for Human Rights to select an international artist who has promoted human rights for at least a decade, a spokeswoman tells Billboard.

The annual award will be presented in fall 2018 during the High Note Honors Concert in London. Proceeds from the concert and its worldwide broadcast will benefit the UN Office of the High Commissioner for Human Rights, the Grammy Museum and the prize winner’s social justice charity of choice.

The High Note Music Prize is part of the High Note Project, a new global social justice initiative launched by philanthropic producer David Clark. Clark previously collaborated with Nelson Mandela on the 46664 series of charity concerts in support of HIV/AIDS, featuring performances by the likes of Bono, Beyoncé, Queen and The Eurythmics. 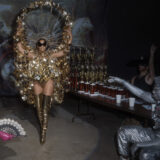 Clark is an executive producer of the project as is Chantel Sausedo, whose other credits include producing the Grammy Awards for TV, the Laureus World Sports Awards and In Performance At The White House specials.

Stuart Galbraith, CEO and founder of Kilimanjaro Live—the U.K. promoter behind heavy metal festival Sonisphere and the U.K. and European legs of the Vans Warped Tour—will be co-producing the Honors Concert in London. “We’re both pleased and proud to have been selected as the promoter of the High Note Honors Concert, which will be a significant global event for music and the artists of our time that are passionate about making a difference in the lives of others,” Galbraith said in a statement.

During the concert broadcast, the prize winner’s selected charity will also benefit from a Cause Flash social media campaign that aims to reach over 1 billion people worldwide. Conceived by Clark, Cause Flash was the digital platform behind Water Now, a social media campaign in support of UN World Water Day in 2015 that reached over 800 million people in seven days, marking the largest such campaign in history.

The High Note Project is supported by the UN Human Rights Office, which is launching a yearlong campaign on UN Human Rights Day (Dec. 10) to commemorate the 70th anniversary of the adoption of the Universal Declaration of Human Rights in 1948.

As this anniversary approaches, “the need for people to stand up to protect human rights is more vital than ever,” Laurent Sauveur, director of external affairs for the Office of the UN High Commissioner for Human Rights, said in a statement. “Music is also a force to be reckoned with, and musicians have the power to mobilize. We are proud to help launch The High Note Project and High Note Music Prize in an effort to galvanize global awareness of the importance of human rights, and at the same time honor artists who passionately use their work to promote and protect the rights of others.”

“We commend The High Note Project and the UN Human Rights Office on their launch of The High Note Music Prize, which will place a deserved spotlight on artists using their music and platform for good,” added Scott Goldman, executive director of the Grammy Museum in Los Angeles. “Music is a powerful tool, and when used to call out injustice that power inspires goodwill in others and affects change across a broad spectrum of social issues.”

GRAMMY-nominated singer and social justice advocate Andra Day, whose song “Rise Up” became an anthem for the Black Lives Matter movement, has also voiced her support for the Project. “I admire the mission of High Note and its decision to recognize musicians for their contributions through song,” stated Day.