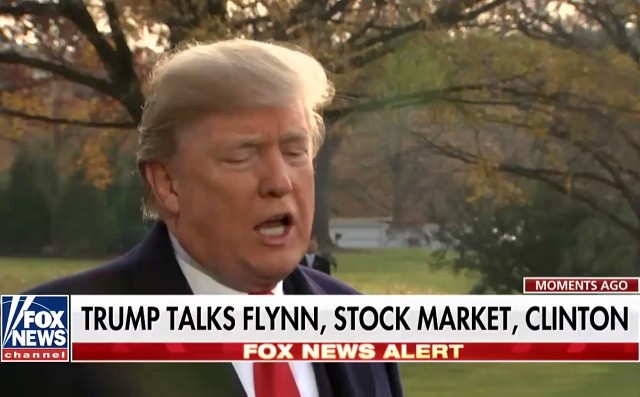 Donald Trump defended Michael Flynn on Monday, saying he feels “very badly” for the former national security adviser who pleaded guilty last week to one count of making false statements to the FBI.

Trump tells reporters on the South Lawn that Michael Flynn lied and “they ruined his life,” calls it very unfair: “I feel very badly for General Flynn.” pic.twitter.com/lTPIE5wuPb

Trump then turned his attention, as he so often does, to Hillary Clinton and her emails.

“I will say this, Hillary Clinton lied many times to the FBI, nothing happened to her,” Trump said. “Flynn lied and they destroyed his life. I think it’s a shame.”

“Hillary Clinton, on the Fourth of July weekend, went to the FBI, not under oath — it was the most incredible thing anyone’s ever seen — she lied many times. Nothing happened to her.” Trump went on. “Flynn lied, and it’s like they ruined his life. It’s very unfair.”

The FBI determined that Clinton did not lie when she spoke with them in July 2016. Although former director James Comey stated Clinton had been “extremely careless” with her private email server, he chose not to recommend charges against her.