Alt-right gadfly Milo Yiannopoulos is apparently a terrible writer, especially when he’s not quietly employing armies of sycophants to ghostwrite his work for him. According to court documents filed by Yiannopoulos’s former publisher Simon & Schuster, the initial manuscript for his book Dangerous–for which the publishing house paid him $80,000–was deemed “unacceptable for publication.”

The filing is a rebuttal to a $10 million lawsuit Yiannopoulos filed against Simon & Schuster when the publishing house canceled the book contract after old video surfaced of the former Breitbart editor advocating for pedophilia. Included in the court documents is a copy of a manuscript with notes provided by editor Mitchell Ivers, an executive at Simon & Schuster’s conservative imprint Threshold Editions.

Polis Books publisher Jason Pinter first tweeted the publishing house’s rebuttal, and software engineer Sarah Mei went through and catalogued the most blunt editorial notes peppered throughout the manuscript. Included in the constructive criticism are notes like “unclear, unfunny,” “delete superfluous ethnic joke,” and “this is not the time or place for another black-dick joke.”

I went to the New York county clerk’s website and found this filing. It includes the entire manuscript with allllllll the editor’s comments as exhibit B. https://t.co/fb9yptldbO

Ivers provided more concrete instructions to Yiannopoulos on how to make his indulgence in self-mythology more readable. The most noteworthy one involves the notorious troll explaining his role in the Twitter harassment campaignagainst Ghostbusters actress Leslie Jones, which led to him getting kicked off that site. 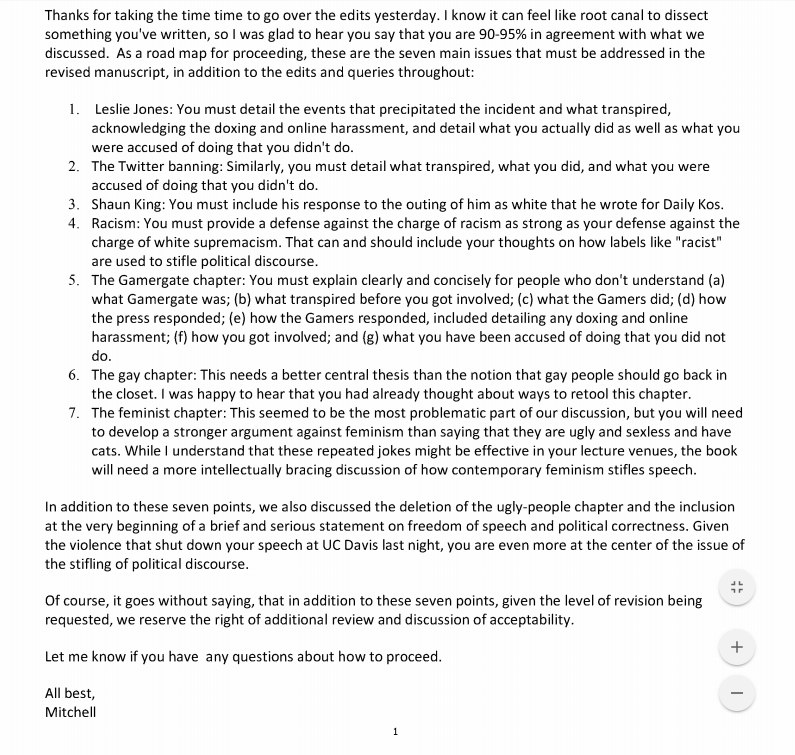 Yiannopoulos belied the bombast and bluster of his public persona when he sent Ivers this email proposing a series of revisions. Here, the guy who fancies himself dangerous sounds like any other insecure writer desperate for his editor’s approval. 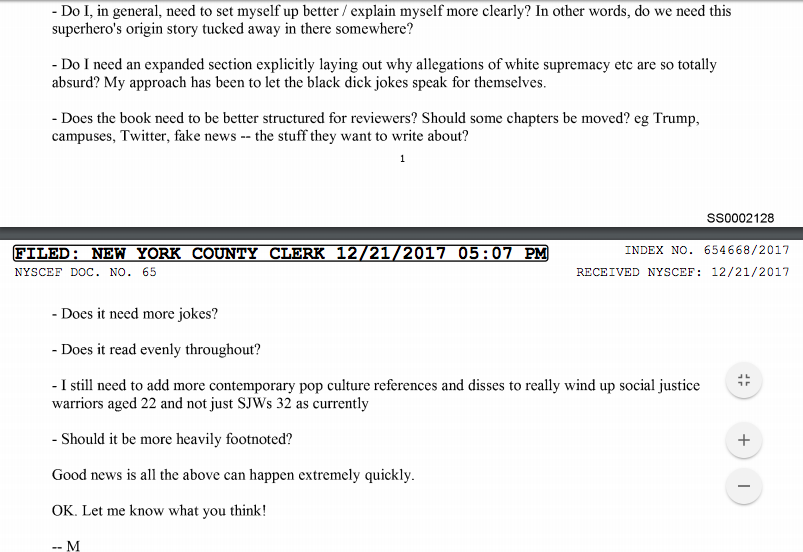 As fun as it is to see Yiannopoulos get roasted, the manuscript nonetheless reflects the exact person—petty, race-baiting, misogynist, etc.—the publishing house initially courted. Simon & Schuster got exactly what it paid for until it was finally too controversial to be in bed with him. The notes may have been what they’re being used as now—insurance against a lawsuit—but they also read as an editor trying to water down Yiannopoulos’ horrific trolling in order to make it more palatable to the average person browsing an airport bookstore.

but also take a moment to consider how milo’s editor was essentially trying to make white supremacy, misogyny, and homophobia publishable: pic.twitter.com/FD6sUgN84c

Nonetheless, the fact remains: the manuscript was really bad. That we can’t dispute.