Is Eminem’s “Untouchable” Supposed to Be the White “Alright”? 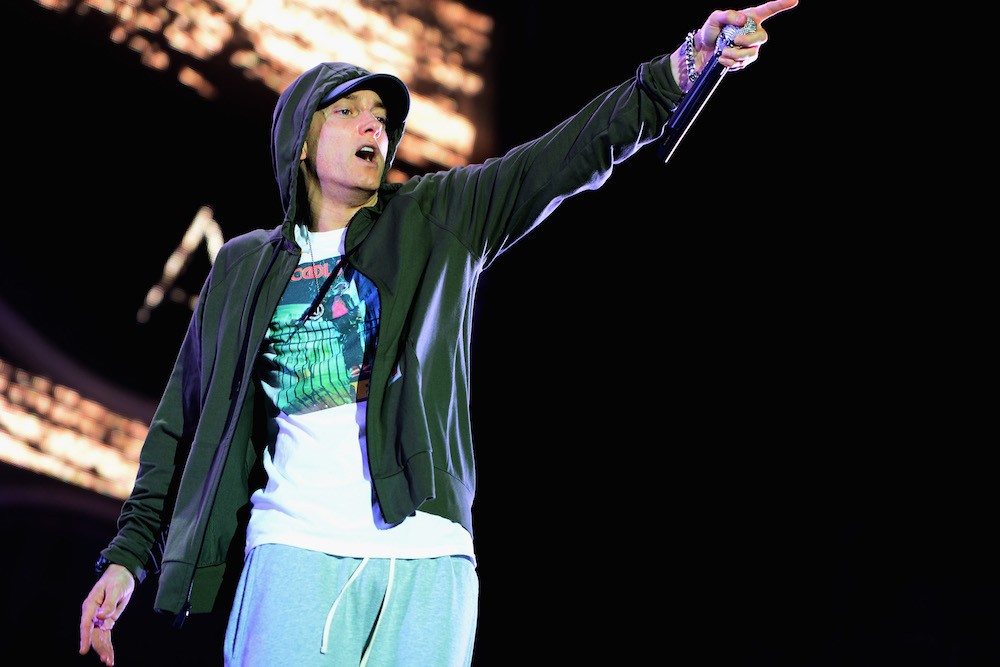 Eminem wants you to believe he’s trying his best. The campaign for his forthcoming album Revival has consisted of an a cappella Donald Trump ether, the inward-gazing “Walk on Water” featuring a charitable Beyoncé, and an album cover with the American flag superimposed over a stressed Em, who’s pained over the state of our nation. On the surface this is an improvement for an artist who’s been constantly criticized for not updating his politics–his most famous songs are pridefully politically incorrect, after all. But his recent tonal enlightenment hasn’t quite stuck: That a cappella performance—more rant than rap—was most notable because it was Eminem dissing the president (as well as his own Trump-supporting fans), and “Walk on Water” was met with a tepid response.  His latest, “Untouchable,” is a full-blown civil rights song, and features Eminem doubling down on his newfound righteousness. Rapped from both a Caucasian and black man’s perspective, it’s the safe and diluted version of “99 Problems” second verse, which uses the same technique without the didacticism.

Fifteen years after referring to himself as “the worst thing since Elvis Presley/ To do black music so selfishly,” Eminem projected self-awareness about being a white rap star isn’t exactly new. But back then, his one-liners came with a necessary wink—his wit showed in how perspective and mischievousness could actually come together in a convincing package. In “Untouchable,” Eminem wraps himself in historical pastiche once again, recalling N.W.A’s “Dopeman” refrain (“White boy! White boy!”) and a rap-rock beat that’s Licensed to Ill gone woke. He even tries to give the sudden beat reversal (hey Em, “Paul Revere” called…) some purposeful context on cue: “As this beat backspins it’s like we’re drifting back in / To the sixties, having black-skin is risky.”

As poorly constructed as the BET freestyle was, there was an undeniable conviction pouring from Eminem as he delivered those lines. On the other hand, “Untouchable” is little more than a plainspoken summation of racial talking points. Eminem raps from the perspective of a racist police officer and a distressed African-American with the sharpness of a suburbanite who is grappling with what the world looks like outside of their neighborhood. Lines like “But you kill each other, facts / You peel each other’s caps for silly stuff like hats” carries such a banality that you’re spending a majority of the “Untouchable” struggling to figure out just who the song is for. I don’t think people who still believe black-on-black crime is some sort of epidemic are the type who’ll be convinced by an edgier Schoolhouse Rock-type song. His message is obvious—that black stereotypes are destructive and divisive, and the justice system is biased against black men. But this point has already been made to anthemic effect with song’s like Kendrick’s “Alright.” He’s speaking from multiple perspectives, but who is it that’s waiting from Eminem to teach them these ideas at this point?

Of course, Eminem will get lambasted for “Untouchable” because he’s Eminem. Logic has been a commercial success atop of politics that focus on inclusive racial platitudes (we’re all the same!) instead of confronting the hard, divisive truths; and last week, rapper Joyner Lucas dropped a video that advises listeners to hug away racial tensions. But Eminem is someone who has been deeply embedded in black culture for most of his life. He should know better.