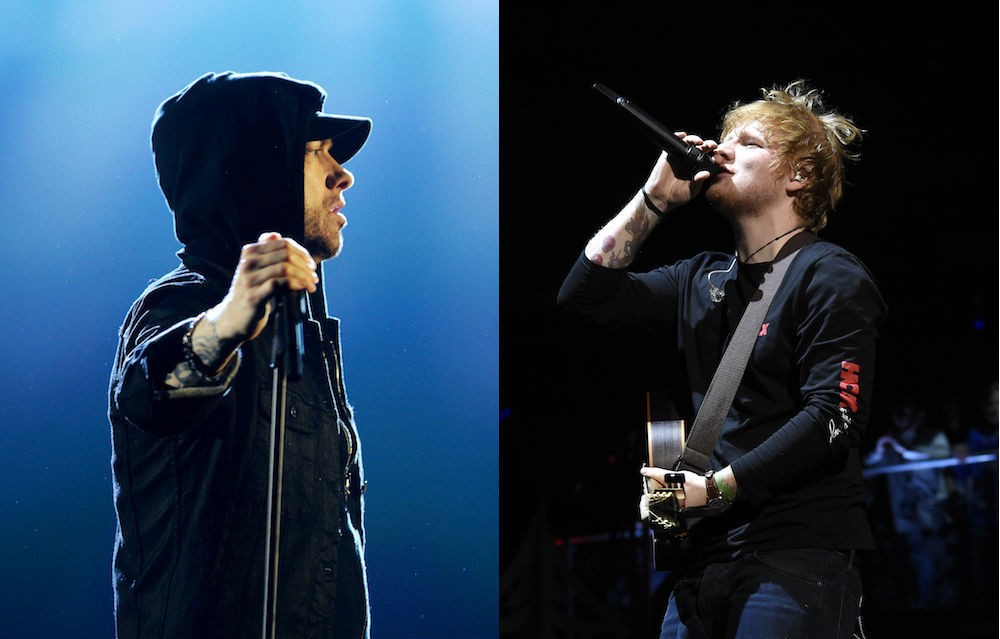 An Eminem-Ed Sheeran collaboration at first seems like an intriguing prospect, if only for its potential for massive, transcendent corniness. Sheeran is a pop songwriter with a remarkable ability to craft a hook and an insatiable appetite for saccharine sentiment; Eminem is one of the most technically proficient rappers ever to touch a microphone, and has spent the last decade concocting songs so overstuffed and undercooked as to sometimes seem deliberately unpleasant. Though their subject matter is often divergent, each approaches his with the conviction that emotions are most convincing when expressed as bluntly as possible. Together, they could construct a glistening monument to banality, a song whose perfection of form is matched only by its emptiness of content. It could be beautiful.

But it is not. The most efficient way to describe “River,” from Eminem’s just-released ninth studio album Revival, would be to say “It sounds like ‘Love the Way You Lie,’ part two,”–that is, if Eminem and Rihanna didn’t already have a song called “Love the Way You Lie (Part 2).” Em and Sheeran’s song plays transparently like an attempt to replicate the success of that original duet, but without a trace of the genuine catharsis that made it into a megahit. Just like on “Love the Way You Lie,” Eminem raps dexterously about a toxic relationship over a beat that’s heavy on maudlin piano and strummed acoustic guitar. (Rather than domestic abuse, “River” focuses on an affair and an unwanted pregnancy, possibly nodding at the classic Bruce Springsteen ballad of almost the same name.) He rapped with believable intensity on the earlier hit, but now he just sounds neutered, mumbling through verses that are as jam-packed with syllables as ever before ramping up predictably to a shout for the last few lines of each. When Sheeran comes in for the chorus, you can almost hear Rihanna singing her lines behind him.

Fortunately, Eminem has not lost his gift for virtuosically goofy wordplay, and if you can ignore the inert quality of “River” itself, you’ll find that it houses its share of memorable lines: “she’s been on the web lately / says maybe she’ll be my Gwen Stacy / to spite her man,”  “I revert to the studio / like hole-in-the-wall diners / don’t have to be reserved in the booth,” “just shit on my last chick / and she has what my ex lacks.” With bars like these, you’re never sure whether to cheer Em along or give yourself a baffled smack on the forehead. They’re not nearly enough to salvage “River,” but at least he sounds like he’s having fun when he raps them, which is a lot more than can be said for the rest of the song.