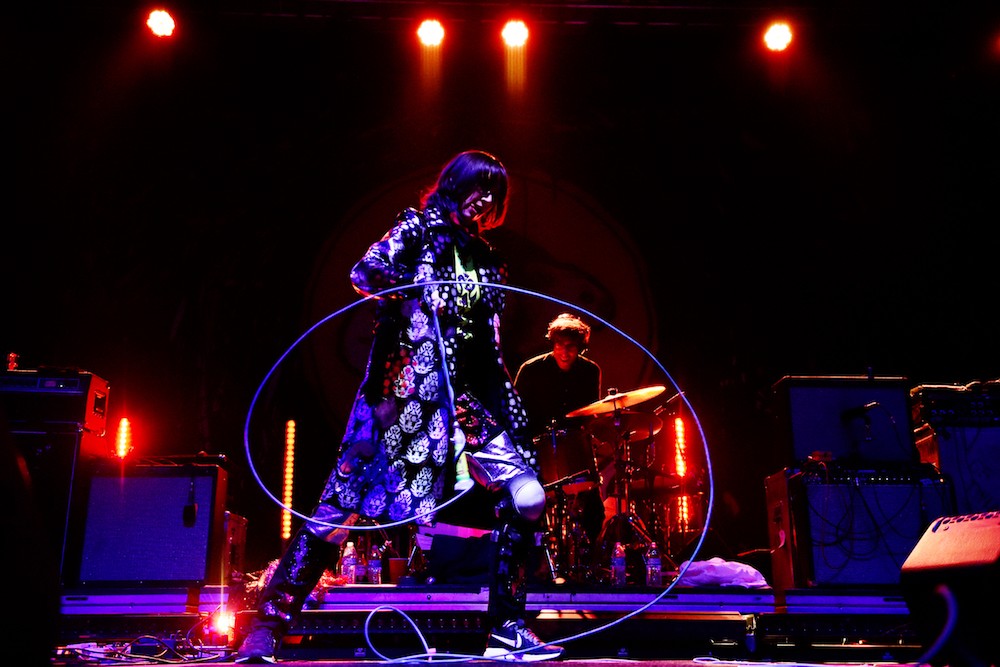 This year has been notable for the aughts’ New York rock luminaries returning to the spotlight, album cycle or otherwise. Grizzly Bear and LCD Soundsystem have been doing strings of Brooklyn shows behind solid new LPs; in September, Interpol did two nights in New York to celebrate the fifteenth anniversary of Turn on the Bright Lights. Some of the draw is rooted nostalgia for an era’s mythologized scene–recently remembered at length in Lizzy Goodman’s Meet Me in the Bathroom–a community that seems impossible today thanks to some combination of technology, venue closings, and high-priced real estate in an already overpopulated city. So when the Yeah Yeah Yeahs played Flatbush’s Kings Theatre on Tuesday night, their first New York show in four years, there was a sense reverence in the air.

A band wearing its importance a decade after its breakthrough can run the risk of being insufferable—we still haven’t forgotten Arcade Fire’s bullshit—but Karen O, Nick Zinner, and Brian Chase are arguably even more enjoyable because they’ve distanced themselves from pretentious overtures about their own importance in favor of earnestness. It’s a tightrope act and the trio balanced remarkably well in their hour-and-a-half, two-encore set. Chase mashed through the band’s familiar, kick-heavy drum patters, Karen howled with a singular kinetic energy, and Zinner delivered the group’s massive riffs perfectly. The show’s most thrilling moments rose from Yeah Yeah Yeahs’ ability bring the audience back to where they were when Fever to Tell’s biggest single was a pop-rock crossover, complete with the emotive angst the band carried with them in their twenties. That energy carried through the hits album cuts that followed it (the night was one of three shows celebrating the announcement of a Fever to Tell reissue). “Rich” and “Y Control” brought forth the iconic, distinctive Karen O vocals; “Maps” and “Modern Romance” carried heavy emotional resonance. In encore, Karen O’s yelps (on “Tick”) and Zinner’s reverb elicited a shared catharsis that was mirrored in the crowd’s response and lingering fallout from a confetti cannon.

The Yeah Yeah Yeahs’ journey over the past fourteen years delivered some context to the night’s significance. Before the show, Goodman introduced a screening of There Is No Modern Romance, a half-hour documentary that follows the trio through their rocky 2003 UK tour. The film showed a young band thrashing in the spotlight as they staved off implosion, questioning themselves and each other while drowning in anxiety and a never-ending cup of alcohol. It’s an emotional juxtaposition for a band entering their 40s, singing to an audience whose youth they soundtracked.