In advance of their forthcoming album Songs of Experience, U2 have announced a massive U.S. tour that kicks off in spring 2018. This announcement follows the conclusion U2’s extensive Joshua Tree tour, which brought the band around the world to perform Joshua Tree in celebration of the album’s 30-year anniversary. That tour just wrapped up last week with four shows in São Paulo, Brazil.

This new tour, called the eXPERIENCE + iNNOCENCE tour, will most likely focus on songs from their upcoming fortheenth studio album, the follow-up to 2014’s Songs of Innocence. The tour will kick off May 2, 2018 in Tulsa, Oklahoma. View a full list of tour dates below and check out their new song “Get Out Of Your Own Way” here. 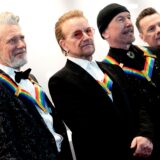 May 15 Los Angeles, CA The Forum