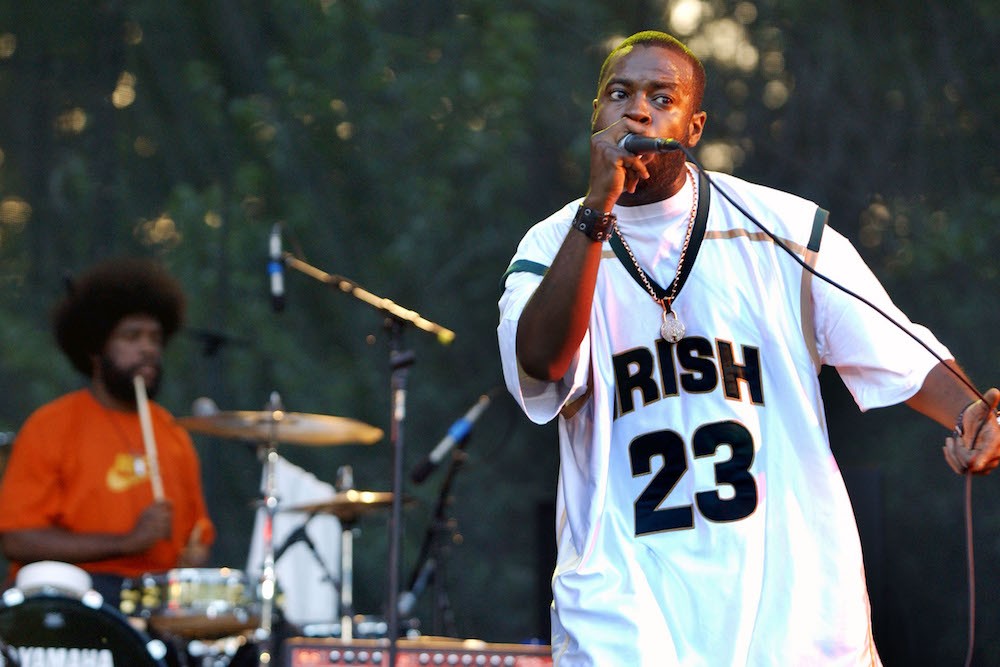 Before they were Jimmy Fallon’s house band, The Roots were generally remembered as being part of a vanguard of artists in the ‘90s who eschewed hip-hop’s mainstream chic for beats-and-rhymes purity. But if one peers closer, an image emerges of a six-member band that used its protean energy to explore hip-hop’s sonic possibilities. Within five years, the Roots continually evolved, shape shifting from a jazz jam band (1995’s Do You Want More?!!!??!), to Wu-Tang’s more wholesome parallel (1996’s Illadelph Halflife), to rap pugilists-turned-neo-soul enthusiasts (1999’s Things Fall Apart). By the turn of the millennium they had made it in a traditional sense: Things Fall Apart went gold a little over a month after its release, while the Erykah Badu-starring single “You Got Me” gave them their first Grammy.

But one peculiar thing about the Roots considering their longevity and sprawling relevance is that even their opuses fell complementary to the dominant narrative of the time, and never quite a part of it. Illadelph Halflife, for instance, is undoubtedly a classic, but placed in a broader context, it feels like a contained alternative to Bad Boys’ wealth and the underground’s aversion to it. As good as Do You Want More?!!!??! is, 1995 was the year of Wu-Tang and Timberland’ed-up New York. Things Fall Apart ended up being the spark that begat the wider movement of the Soulquarians, a gang of high-minded Afro-eccentrics that included Badu, Common, J Dilla, and D’Angelo, who released the immortal Voodoo a year after.

It would’ve been unwise for the Roots to attempt to redo Things Fall Apart’s’ neo-soul chemistry—?uestlove and Black Thought were cool, but a few steps below the baptismal qualities of D’Angelo. In addition to being at a creative crossroads, the mainstream attention forced them into increasingly uncomfortable spaces. A 2002 VIBE story found Black Thought pissed off before a show attended by an “almost entirely white, Sex and the City-style crowd” in the Hamptons, saying “I’m not a fucking jester.” They left without performing after then-Roots member Dice Raw nearly beat up a white dude for saying the N-word. They achieved the props they thirsted for, but for what?

Change had already been in the Roots’ DNA, but their popularity also brought on a different sort of external pressure. In three years, they were back with what ?uestlove called their “anti-Roots Roots album.”

The first notable change from prior records present in Phrenology—which turned 15 on November 26—doesn’t come directly from the Roots. From Do You Want More?!!!??! onward, lyricist Ursula Rucker closed each album with bleak and emotive urban tales that served as sobering addendums to the Roots’ experimentation. Rucker returns on the opener “Phrenthrow” to tell a first-person hip-hop origin story. In a deliberate break from the Roots’ formula, she’s abruptly cut short twenty seconds in by the sparse and ball-fisted “Rock You.” Punk freakout “!!!!!!!” follows right after. The Roots’ growth through their prior four albums quickly looked subtle in comparison.

The group spends the remaining hour veering into drum ‘n’ bass, prog-rock, techno, psychedelia, and even back to neo-soul. But for all its tempestuous genre leaps, Phrenology is still a hip-hop album at its core—Rucker even returns to spend a whole track shouting out the Roots’ forefathers and peers, contextualizing the group’s experimentations as simply part of a multitudinous lineage rather than a rebellion against it.

The Roots place themselves at the intersection of extremes and familiarity right from the album’s title. Phrenology (and its cover) directly refers to the 19th-century pseudoscience used to justify slavery, but also proposes a new Roots-specific meaning: “Ph” for Philly, “re” for re-entering the scene, and “nology” for knowledge. And even though the LP tried to aggressively refute who they thought people thought they were, ?uestlove was also preoccupied with returning to, well, their roots. “We wound up turning our backs to neo-soul because we think it’s more important to show the range of the group than cash in on a genre,” he told Ebony in 2003. “We took it way back.”

After loosening up a bit to give Things Fall Apart a sense of spontaneity, the wanderlust of Phrenology nonetheless has a sense of direction thanks to the discipline that’s apparent in its songwriting and musicianship. The Musiq Soulchild-featuring “Break You Off” is supposed to read like an early-aughts R&B relic; instead, it’s a seven-minute, two-part suite propelled by ?uestlove slipping into a drum ‘n’ bass tempo and the warmth of Kamal Gray’s honeyed keys. The “The Seed (2.0),” the album’s big crossover hit, is a hallmark of lean songwriting even though the story behind it is chaotic: ?uestlove recalled in his 2013 memoir Mo’ Meta Blues that because Cody ChesnuTT—who wrote the original “The Seed”—was tardy to a recording session, ?uest had to rush through his takes to avoid missing a date.

The album’s extremity is seen in the the 10-minute “Water,” which turns a Flying Lizards sample into the best drug-prevention funk since Superfly, before then devolving into a bleak avant-garde descent. After spending most of Phrenology putting rhythmic performance over immediate quotables, Black Thought dedicates his verses to original Roots emcee Malik B, who left the band because of drug problems. As personal and adventurous as that centerpiece is, Black Thought takes care at the track’s start to place it within a wider context: “South Philly / North Side, Oakland / Texas, Georgia / Black People,” a reminder that drug addiction touched black communities in every corner of America.

To be even more on-the-nose, the Roots managed to nab, Amiri Baraka, the now deceased authority in black music history, on the album’s thematic closer “Something in the Way of Things (in Town).” The zooted chord progression flips into a schizophrenic tempo switch as Baraka’s prose blurs the line between the prophetic and the fantastical. Lines like ”I tried to put a spell on him but his spirit is illiterate” are almost too vivid and variegated to make sense. In its way, it’s the perfect end to the album.

Phrenology was supposed to prove the Soulquarians movement was thriving with ever-widening ambitions. Not quite. Common’s Electric Circus, which dropped two weeks after, had Phrenology’s ambitions but ultimately lacked its finesse. Common and Badu broke up, as did the Soulquarians. Phrenology became the last classic to spring from the collective, though Badu, J Dilla, Common, fellow member Q-Tip, and D’Angelo still had plenty of magic left when they splintered in their own directions.

By virtue of being an anti-Roots Roots album, Phrenology ended up alienating some of the group’s core fans. “Phrenology was a collage, a cut-and-pasty thing that many previous fans found discomfort in,” said the Roots’ late manager Rich Nichols, who serves as Mo’ Meta Blues’ acerbic second narrator. “They were like, ‘What the fuck are you doing? You have this punk thing and this R&B thing. Who the fuck are you guys?’” The Roots appeared to embrace their pop potential with their next album, 2004’s The Tipping Point—a risk that resulted in the most tepid critical response the band had ever received. They regained their cred in the consequent albums, but never quite resparked the momentum.

A decade-plus later, the Roots have shifted from anti-establishmentism to being part of an institution—the group is an integral part of late night’s most apolitical variety show. But of course, hip-hop remained ever-changing without the Roots in their prime. ?uestlove mused in his memoir that his “cultural value comes from [his] role as a bridge.” In a 2011 Pitchfork interview, he gave one example of this bridging, in the summer of 2004 when Dave Chappelle’s Block Party was being filmed.

Kanye was there and, at the time, he was just, like, Usher’s opening act. But watching him control his marching band, I knew instantly that he was going to make noise– just seeing how passionate his black audience was towards him. Of course, every demographic in every sector of the Roots’ graph was anything but inner-city black youth. So seeing that power Kanye had, I thought, “Wow. This is when we’re gonna hand the baton to him, and he’s going to be the new leader.” I was OK with it, but I felt a little sad. We had to regroup and start all over again.

The range of West’s influences—Chicago house, prog-rock, gospel—is well documented. That sort of breadth is part of what makes him a singular artist, but at the same time, it has forced his fan base to consider just how much of that range was already present in black music’s history, just like the Roots did before him. Then, of course, there’s Kendrick Lamar’s To Pimp a Butterfly, which strengthened its claim to being the Great Black American Album with its extensive use of jazz and funk instrumentation.

But treating creative leaps as a return to essence isn’t a new innovation. Phrenology was a holistic treatment of black music, teaching a new generation African-American listeners to see punk-rock freakouts not only as excursions but a reflection.