After an 18-month hiatus, British crooner Sam Smith is back with his sophomore album. Teased in August but announced officially earlier this month, The Thrill of It All will be released November 3. Despite the album’s title, listeners can expect little overt thrills but a lot of tear-stained heartache on Smith’s new record. Those who enjoyed his first album, In the Lonely Hour, will likely find similarities in his follow-up, which shares many of the same producers and lyrical themes with his 2015 debut. Here is what we know so far about Sam Smith’s forthcoming second album.

The songs we’ve heard so far are piano-heavy ballads.

The singles released ahead of the album have kept with Smith’s propensity for lush production that serves as a springboard for his vocal crescendoes. “Pray” features a string section and a backing choir that swells to a peak during the chorus’ refrain, while “Too Good at Goodbyes” leans into Smith’s delicate falsetto, with a pared back production that at times uses his vocals as the only instrument. Last week, Smith released “Burning,” a similarly minimalist ballad about heartbreak. That one features a single piano and a choir that joins him for the last chorus, allowing Smith’s depth-defying vocals to shine throughout the track.

While these songs are an expectedly noticeable departure from his last release, the theme for the 2015 Bond movie Spectre, they are a natural continuation of the heart-drenched ballads on his debut album In the Lonely Hour. 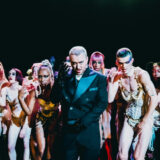 Smith will promote the album with an extensive world tour

Before the album even hits the shelves, a long The Thrill of It tour is already scheduled for 2018. Smith announced the tour in October when he revealed the release date for his upcoming album. The tour will include stops across Europe and North America, spanning nearly 20 countries over the course of seven months. A full list of tour dates are available on Smith’s website.

Smith is working with new producers on this album, including Timbaland and Channel Orange producer Malay.

In addition to In the Lonely Hour producers Jimmy Napes and Steve Fitzmaurice, Smith’s forthcoming album will feature a few additional producers. In addition to Timbaland, who produced album single “Pray,” Smith recruited James Ho, a.k.a. Malay, who produced the majority of Frank Ocean’s excellent debut Channel Orange as well as tracks on his follow up Blonde. Other production credits go to Emilie Haynie, who co-produced Kanye West’s “Runaway” along with several Lana Del Ray hit singles, including “Born to Die” and “Summertime Sadness.”

Malay produced two tracks on the album, “Say It First” and “Midnight Train,” while Haynie’s sole credit on the album is “Baby, You Make Me Crazy.” While these new producers will certainly add their personal touch to the record, most of the songs on the new album were crafted by executive producers and longtime Smith collaborators Napes and Fitzmaurice.

Songwriters for the album include the Norwegian powerhouse Stargate, who have worked with Béyonce and Rihanna, and Justin Bieber collaborator Jason Boyd, aka “Poo Bear.” Interestingly, several members of American funk band Kool & the Gang are given writing credit on “Baby, You Make Me Crazy,” which suggests some sort of sample.

This is Smith’s “gin and tonic” record

The songs we’ve heard so far share one common theme: loneliness. In an interview with Billboard, Smith confirms the album’s moody lyrical content: “I haven’t been very lucky in my romantic life, it’s true. I’ve found it all pretty difficult, and I guess in my songs it all just comes spilling out.”

To Rolling Stone, Smith described it as a “gin and tonic” album, warning listeners that the songs may even be a bit too emotional for him: “The new album is a whiskey by yourself in a dark room, at night, thinking about life. I went into a deep place. I don’t think I’m going to go into that place ever again, because it got a bit too deep.”

The songs we’ve heard so far confirm his tendency towards melancholy: on “Burning,” Smith sings of smoking a pack a day after his lover leaves him, while “Pray” sees the singer begging an unnamed paramour to sit down for a “one on one.” This should not be a shocker to fans of his previous releases, which tend towards the doom and gloom. What is new, according to The New York Times, is Smith’s discussion of his sexuality in the lyrics of his songs: “Him,” off the new album, will apparently describe an “imagined boy in Mississippi coming out to his father.”

sam smith, what we know