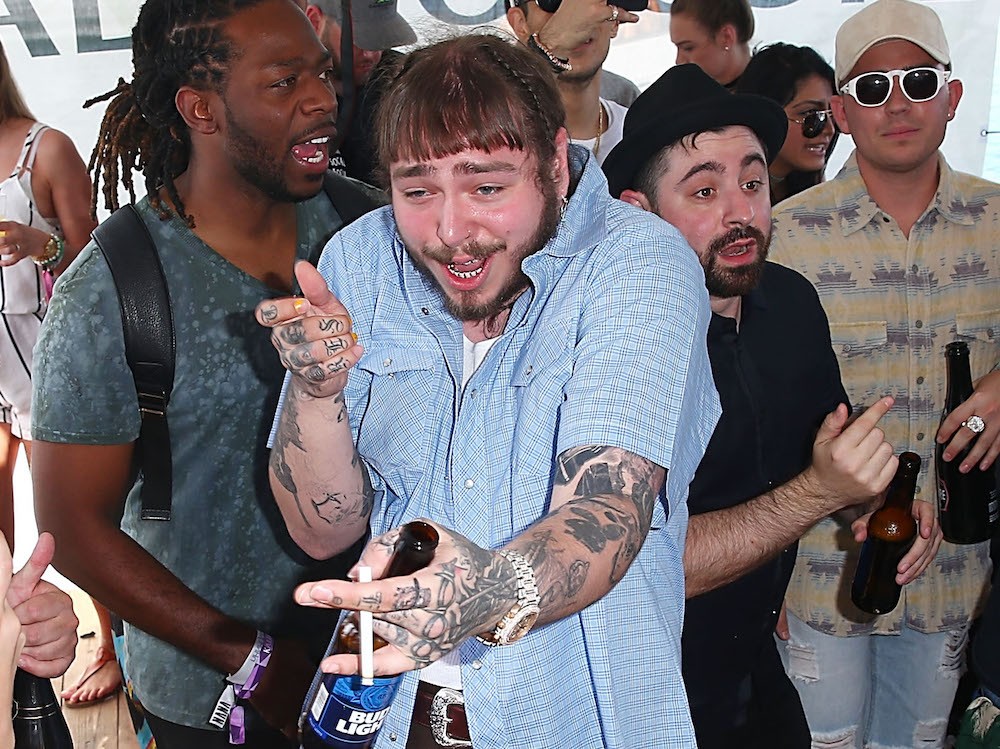 Rolling Stone has a revealing profile of Post Malone, in which the “Rock Star” discusses his love of Masterpiece Theater, speaks thoughtfully about the current political crisis in Saudi Arabia, and shows off his surprising collection of ultra-luxury fountain pens. Just kidding! Post comes off pretty much exactly as you’d expect him to, but more so: he loves Call of Duty, he’s planning on purchasing a compound in Utah with bunk beds for 30 of his closest friends, and he’s the type of conspiracy theorist who keeps a pump-action shotgun on the floor beside his bed.

The magazine’s reporter asked the rapper about weaponry after seeing an issue of Guns & Ammo on his counter. Here’s what happened next:

Turns out that today he just wants to stay in, “but I can show you what I got here if you want,” he says, at which point he leads me to a walk-in closet, which is where I learn that Malone owns a disconcerting amount of weaponry. “This is an M14 – the gun Navy SEALs use,” he says, placing a chunky rifle in my hands. He takes it back, hands over a Walther PPK – “James Bond’s gun” – with decorative engraving down the barrel. Next up are a .44 Desert Eagle hand cannon and an M1911 pistol, then two gold-plated Glocks – “I’d never actually shoot these.” Finally, there’s his Cobalt AR-15, an assault rifle, specially modified to pass California regulations, that he’s particularly proud of. “Looks like something out of Halo, right?”

He ducks into a bathroom to ash the cigarette he’s smoking, then makes for his master bedroom, which he shares with his longtime girlfriend, Ashlen. On the floor beside their bed is a pump-action Mossberg shotgun: “Great for home defense.” He reaches behind a pillow, fishes out an FN Five-Seven pistol fitted with a laser sight and – to better disorient any home invaders, he explains – a strobe light. He goes behind another pillow, pulls out a Glock 19. “This is for Ashlen. It’s supereasy to use.”

Post, who later explains that he’s earnestly interested in “alternate news,” “chemtrails,” and “conspiracy shit,” said that he keeps the guns in part because “the world is going to shit,” and “something’s coming.” OK man!

Like plenty of other white artists who made their names with music and cultural signifiers that originated in black communities, he also displays a frustrating lack of awareness or reflection about his own fraught relationship with race and hip-hop. Asked about an interview in which Charlamagne tha God castigated him for not doing enough to support the Black Lives Matter movement, for instance, he says “He hates me because I’m white and I’m different.”

It’s worth considering that plenty of black rappers have gone to jail on gun charges for maintaining similar or smaller arsenals than Post’s. Somehow, it’s hard to imagine the same thing happening to him.