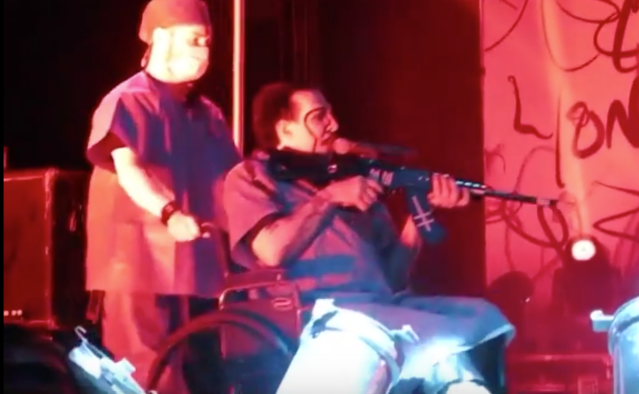 Last night, at his first concert since suffering an on-stage injury in October, Marilyn Manson pointed a fake assault rifle fitted with a microphone at a crowd in San Bernardino, California. Manson took a lot of justified criticism for the stunt, staged the same day a mass shooter killed 26 people in rural Texas and in the same city where a mass shooter killed 14 people in 2015. This afternoon, Manson released a non-apology explaining the point of the stunt:

In an era where mass shootings have become a nearly daily occurrence, this was an act of theater in an attempt to make a statement about how easily accessible semi-automatic weapons are and how seeing them has become normalized. My art has always been a reaction to popular culture and my way to make people think about the horrible things that happen in this world. My performance was not meant to be disrespectful or show any insensitivity. The prop microphone I used on stage was handed to me with the approval of a police officer. My empathy goes out to anyone who has been affected by the irresponsible and reprehensible misuse of REAL guns.

Maybe everyone at last night’s show understood Manson’s intentions and felt unperturbed at being targeted by a fake gun hours after reading news accounts of yet another shooting that left dozens dead. But at a minimum, the wider public’s disgusted reaction would seem to indicate that, despite an unending series of mass murders in America, Manson was wrong about how “normal” it is to see a man wielding a semi-automatic weapon in front of a large crowd.