Was Trump Behind 2014 Effort To Foil Bon Jovi’s NFL Bid?

Was Donald Trump the secret force behind the seemingly grassroots 2014 campaign to block Jon Bon Jovi from buying the Buffalo Bills?

That’s what those involved are saying now, three years after the billionaire and the rocker were competing to buy the Bills. At the heart of the effort was the creation of a fan group called 12th Man Thunder that pushed to keep the team in Buffalo and exploited already rampant speculation Bon Jovi planned to move the franchise to Canada.

Among the group’s antics in the spring of 2014 were the collection of thousands of petition signatures and distribution of “Bon Jovi Free Zone” posters calling for a boycott of his music in bars, shops, and on radio stations. All of it received widespread media coverage, including from The Associated Press.

“At the time I wish I could have told people,” said Charles Pellien, one of the group’s leaders. “I just wanted to blurt out, ‘Donald Trump is behind this!’” 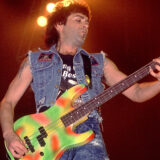 Alec John Such, Founding Member of Bon Jovi, Dies at 70

Neither the White House nor the Trump organization responded to requests for comment on the claim, which was first mentioned on a Buffalo-area radio show in March and reported last month by GQ magazine.

But according to Michael Caputo, a Buffalo public relations consultant who would go on to work on Trump’s presidential campaign, Trump himself came up with the idea for the group at a Trump Tower meeting in early 2014 as a way to tap into widespread fan anxiety at the time over a potential Bills move to Canada.

“Mr. Trump was convinced that the community wouldn’t stand for a move,” Caputo told the AP. “So he sent me off to try to organize something with local fans to get that rolling.”

Once back in Buffalo, Caputo enlisted Pellien, a truck driver who lives near the Bills’ stadium in Orchard Park, and others to form the volunteer group, which quickly amassed an email database of 15,000 fans.

Speculation that Bon Jovi’s group intended to move the team was fueled by the fact that it included two Canadian heavyweights, Larry Tanenbaum, chairman of Maple Leaf Sports and Entertainment, and the Rogers family, which controls Toronto-based Rogers Communications.

And with the Bon Jovi group expected to bid more than Trump was willing to pay, Caputo said, Trump believed tapping the fan emotion would improve his position.

“He wanted to be the hometown favorite because he would keep the Bills in Buffalo,” Caputo said. “It was always his intention to come in here on a white horse and save the team.”

Organizers said Trump stepped away from even behind-the-scenes involvement after signing a nondisclosure agreement attached to the bidding process that barred him from doing public outreach around it.

Bon Jovi, whose representatives declined to comment for this story, responded to the 2014 campaign with a letter to The Buffalo News that said his ownership group’s objective was “to make the Bills successful in Buffalo.” The letter came a little more than a week after the AP reported that the singer’s ownership group conducted a feasibility study into building a stadium in Toronto.

In the end, 12th Man Thunder’s efforts were for naught because Buffalo Sabres owners Terry and Kim Pegula submitted a bid no one could top — $1.4 billion — and became the new owners.

After the sale, the fan group, now known as Bills Fan Thunder and still led by Pellien, transformed into a charitable group that brings underprivileged children to their first Bills game.

As for Pellien’s feelings about Bon Jovi today, “Some people forgave and forgot and other people will never forgive. I’m kind of one of them.”