Review: The Killers’ Shamelessly Glam Wonderful Wonderful Is Their Strongest Work In Years

At last I know: George Herbert is Brandon Flowers’ Rosetta Stone. Writing from the point of view of an object of sacramental importance or as Jesus Christ himself, Flowers presents himself as love flesh requiring worship. (He’s in good company: Madonna liked Herbert too). I’m straining because two months after its release “The Man” sounds no less preening and absurd. The first single from the Killers’ fifth album Wonderful Wonderful is maladroit rock-disco, with the weediest falsetto heard since I sang Mariah Carey’s “Someday” at karaoke in 2011, but when I heard the superior Jacques Lu Cont remix at a gay bar last month “I got gas in the tank / I got money in the bank” packed the resonance of the Beatitudes. A gay bar is a secular temple where the line between the worshipped and the supplicant gets blurred; getting laid or sticking to the dance floor is an act of self-affirmation.

I doubt whether Flowers gets laid as often as the average Twist patron. From the catch-in the-voice repetition of its title to the urgency of Dave Keuning’s guitar lines, there’s desperation in the confidence of Wonderful Wonderful—the desperation of a band, a dozen years out from a multiplatinum debut, dependent on streams and gigs for old age pensions to spend in Carson City. “Don’t give up on me,” Flowers urges over chiming Joshua Tree guitars in “Rut.” Accompanied by Ronnie Vanucci’s cymbal-free pounding in the verses and Mark Stoermer’s bass, a multi-tracked Flowers dances for rain and pleads for rescue from the “motherless child” of lore.

But the most prominent instrument at the Killers’ disposal, played with a proficiency unsurpassed by any modern band, is shamelessness. Crucially, no matter the depths of his love for God, Flowers can’t forgive Him for making him straight. A heterosexual man whose cheekbones were made to shimmer translucently at Wembley represents a unique kind of shamelessness, I must say. Just when Wonderful Wonderful hearkens back to a late eighties purgatory populated by Glass Tiger, Woody Harrelson will offers a spoken word Gospel cameo in “The Calling,” prefatory to Flowers grunting, “Walked into town with a message for my old man / I got the last two chapters of Matthew in my hand”—not bad at all, second maybe to the bit in “Out of My Mind” where he has to wipe saliva off his spectacular chin to groan, “So I told you about McCartney / And that’s a heavy name to drop,” but a distant third to LFO’s “New Kids On The Block / had a bunch of hits” from 1999’s immortal “Summer Girls.”

Although Flowers has the looks and possibly the brains and has made lots of money, the Killers haven’t succumbed to the prion disease that has turned Maroon 5 into Adam and the Levines. Stoermer is the nervous thumping heart of “Run for Cover,” for which Arcade Fire would’ve donated a sequencer in exchange for a credit, which eventually soars thanks to a pair of distorted, fascinatingly tuned Keuning solos. Flowers’ synth work carves lovely spaces between Stoermer and Vanucci’s rhythm on “Some Kind of Love,” the lovelorn ballad that Flowers has spent years trying to write; it might have crossed over a decade ago. 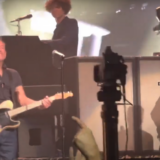 Still, these guys have their limits, and by the time Flowers is wondering “Have All the Songs Been Written?” I’m wondering too, especially after the back half of Wonderful Wonderful drifts toward an ignominious close. Although I prefer 2015’s The Desired Effect, Flowers’ excellent queer-drenched solo album, Wonderful Wonderful is the Killers’ strongest statement since 2005, a more than okay affirmation of their power to keep a global audience. If he’s traded Bronski Beat samples for Brian Eno, well, credit Flowers’ good taste in gussying up his music—so long as he holds on to the bad taste he’s shown elsewhere.