Review: R.E.M. – Automatic For the People

Pop culture can turn on you, and R.E.M. doesn’t want us kids to forget it. “Drive,” the first single from Automatic For the People, with its majestically fingered acoustic guitar, comes on like a cautionary ballad reminiscent of Pink Floyd‘s foreboding “wit.” “Hey kids, rock’n’roll, nobody tells you where to go … Maybe I ride, Maybe you walk, maybe I drive to get off, declares Michael Stipe, never murmuring. Without a trace of feigned complicity or pained preachment, “Drive” lays out the ambiguous facts of pop life. It’s essentially a big-budget rewrite of fellow Athenians Pylon’s “Stop It,” new wave’s dopest dance track, which shouted out for kids to just say no … and yes … and no, to, yeah, rock’n’roll. Strings swell, then recede, and Stipe’s voice echoes: “Hey, kids, shake a leg / Maybe you’re crazy in the head.” In other words, wake up and smell the teen spirit!?

Why Stipe was never asked to host MTV’s ill-fated Like We Care is beyond me. It would’ve been great theater—an icon trying to make sense of the inarticulate musings of tortured teens with bad skin who worship him. After all, it takes one to know one. R.E.M.’s “Stand” should’ve been the theme for Beverly Hills, 90210‘s achy-breaky rites of passage instead of Get a Life‘s shempy stasis. By no means a slacker, Stipe has wanted to be a pop singer so bad for so long that now, on Automatic For the People, R.E.M.’s eighth LP, it hurts so good. Many of the songs on Automatic are calls to action disguised as studio-crafty cries for help. The kind of stuff John Lennon and Wilson Phillips used to pull off so well. On the white-anxiety-gospel of “Everybody Hurts,” Stipe even pleads, “Hold on, hold on.” Find the River,” with an earnest strum-strum, plinking piano, and elementary-school-recorder melody, is so lump-in-the-throat hypnotic that the tragically lame poetry achieves a certain inspiring grandeur of lameness. Stipe is bluntly cautionary again, but once the song’s narrative gets to the ocean, he doesn’t spook us with a 400 Blows send-off. He simply croons: “All of this is coming your way.”

Nirvana‘s name may be graffitied on the convenience stores of America, but R.E.M. is the band that made it virtuous and cool again for pop stars to bleat about pop culture. Unfortunately, the penance for Berry-Buck-Mills-Stipe was two conventional rock albums (Document and Green) with a dearth of hummable tunes and loads of totally discernible lyrics which showed the political self-awareness of Fugazi or Country Joe and the Fish. Still, the records never really sucked, and hey, these were stand-up guys. So when I went to see the Butthole Surfers sometime during 1987 and they did a scathing, acid-punk version of “The One I Love,” setting dollar bills on fire and throwing them into the audience, I couldn’t relate. It was the petty, bitchy response of betrayed fans and I didn’t feel betrayed. I was just bummed that R.E.M. would rather be a mainstream rock band than a tortured pop band.

But 1991’s Out of Time put most of that shit to the curb. Stipe’s personal and political selves got cozy. He finally “came out” as a pop star. And R.E.M., the stymied art-rock collective, became his brilliant backup ensemble. Full of homoerotic yearning, the “Losing My Religion” video was thrilling—Todd Haynes’s film Poison as poignant advertising. Stipe wasn’t pushing abstract headline anxiety, but a tangible fear of the fate of spirituality and sexuality in the age of AIDS. The rest of the album, from the fervid inanities of KRS-One to the unbearable perversity of “Shiny Happy People,” felt risky—careless, even. 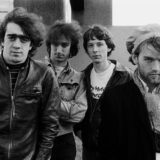 So whatever reputed soap operas went on behind the scenes during the recording of Automatic For the People, R.E.M. sounds like a tortured pop band getting off on being a tortured pop band (the Southern-folk Steely Dan?). Among the cries for help, there are memorable melodies galore and even some good, pretentious fun. “The Sidewinder Sleeps Tonite” is a totally wack blue-yodel about living in the boonies, reading Dr. Seuss, and never answering the phone. And with a suite of songs on side two, R.E.M. earns its indulgences. “Ignoreland” is a scattershot anthem about somebody’s dumb idea of politics, until Peter Buck unloads a wailing lunkhead rock riff that sucks you in, and Stipe admits that he’s only screaming cliches to make himself feel better. “Star Me Kitten,” with its laconic organ and oceanic choir of “ah-ah-ah”s, could fit on the Beach Boys’ Pet Sounds, except for Stipe’s matter-of-fact whispering, “I’m in your possession / nothing’s free / so fuck me kitten.” And “Man on the Moon” (the coolest, catchiest R.E.M. song since “Radio Free Europe”) name-checks Mott the Hoople and pro-wrestling’s Freddie Blassie while grappling with the seductive history of pop in an open letter to deceased comedian Andy Kaufman. When Stipe goofs on Kaufman’s Elvis impression (“Hey baby”), he’s implicating R.E.M. in the whole breakfast mess of pop culture. Who killed Andy? Who knows? But just for the heck of it, let’s frame that kid in the Toad the Wet Sprocket T-shirt.