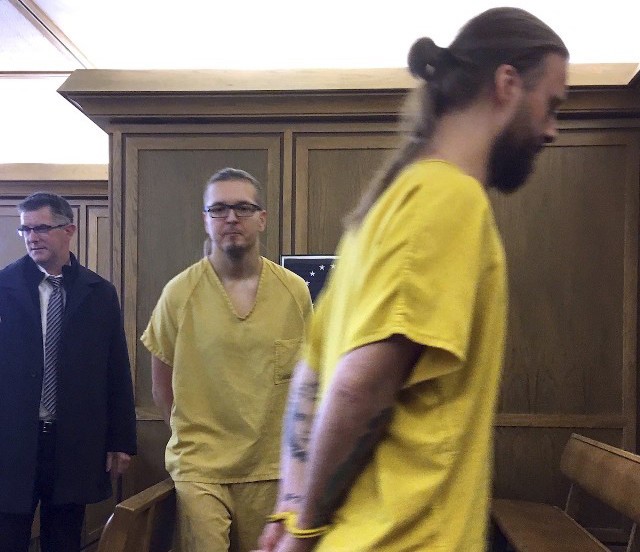 All four members of a Polish heavy metal band pleaded not guilty Tuesday to charges of kidnapping and raping a woman on their tour bus after a concert this summer in Washington state.

The members of the band Decapitated are jailed on $100,000 bail each and have denied the allegations by a woman who told police she was invited onto their bus and then attacked in the bathroom by all four.

Lead singer Rafal Piotrowski and band members Hubert Wiecek, Waclaw Kieltyka and Michal Lysejko said little during the court appearance, other than to enter their pleas.

“I am not guilty,” Lysejko told the judge in heavily accented English. The other three also entered their pleas in English, and all four wore yellow jail jumpsuits and handcuffs as they came and left the courtroom.

A Polish interpreter explained the court proceedings to them over a speakerphone.

The group was arrested in Los Angeles in September and sent to Washington earlier this month to face charges. Spokane County Superior Court Judge Annette Plese set trial for Dec. 18 but said it’s likely to be pushed back into the new year.

Attorney Jeffry Finer, who represents Piotrowski, said his client has no known criminal record in the United States or Poland. Finer said last week that the band has made numerous visits to the U.S. over the years with no criminal incidents.

In a statement recently posted on social media, the band said the allegations were false and they were confident they would be released and allowed to return home.

Two women told police they were invited onto the tour bus after the band’s show in downtown Spokane the night of Aug. 31. One woman said that after talking with the band, she went into a bathroom on the bus, where she was grabbed and raped by each member of the band, court documents said.

The other woman told police she was able to escape after kicking one of the men in the groin, documents said.

Lawyers for the band members have said they have witnesses who can dispute the women’s accounts.

In addition to $100,000 bail, the men were ordered to surrender their passports.