During his April 30th show at Terminal 5, rapper Travis Scott goaded fans into jumping off the venue’s upper balcony, assuring them the fans on the floor would catch them. One unwilling fan reportedly fell off the balcony and to the floor in the frenzy, and now he’s suing Travis Scott for damage from the fall that he claims has left him paralyzed.

23-year-old student Kyle Green said he had surgery for fractured vertebrae, a fractured right ankle, a broken left wrist, but he remains paralyzed on his left side and relies on a wheelchair to get around.

“I fell and hit the floor. Before I knew it, I was surrounded by security guards, who scooped me up,” he told the New York Post. “Travis Scott was yelling at his security guards to bring me to the stage. They didn’t put a backboard or a neck brace on me or anything, they just kinda lifted me up and pulled me around,” he said. “Then they dropped me in front of the stage.”

After the crew dropped Green on the stage, Scott gave Green a ring for his troubles. “I love you, kid,” Scott said to him, then proceeded to ask, “Why the fuck would you do that?” 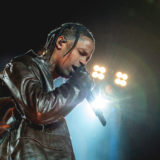 Footage posted to social media earlier this year backs Green’s claims, with clips of Scott giving Green his ring and Green being carried out of the venue without a backboard or neck brace.

The guy who got paralyzed waist down from jumping off the second story balcony being carried out of the venue pic.twitter.com/xDMnnkCfCB