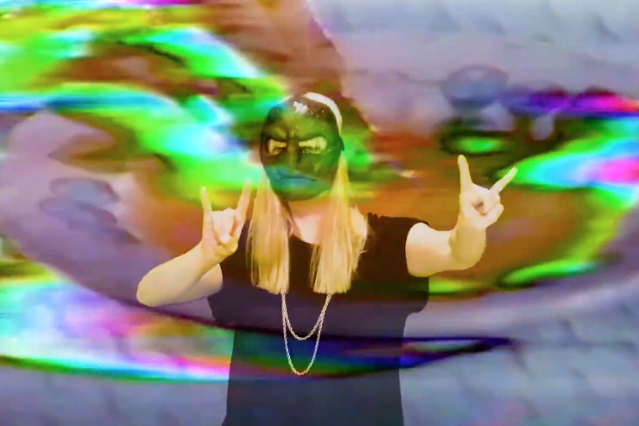 Experimental pop artist EMA has always been fascinated with how technologies, and sometimes other substances, mediate reality. She’s deeply into both in the trippy, ultra VHS-wave new video for “Fire Water Air LSD,” a track from her recent third album Exile in the Outer Ring. The clip was directed by video artist DaVideo Tape and art directed by EMA herself (real name Erika Anderson), who said:

“Our inspirations were reptilians and the county fair. I used a lot of lizards and snakes in my own VR project in 2015—to me they represent layers of hidden meaning and hidden reality, or at least belief in hidden layers of reality. The county fair is just cuz when I wrote this song I wanted it to sound like Guns N’ Roses coming out of grandstand speakers at a demolition derby.”

If the phrase “Max Headroom broadcast signal intrusion” means anything to you, you’ll probably love this. Exile in the Outer Ring is out now from City Slang. Watch “Fire Water Air LSD” below.

New Music: EMA – “Stand With You (Song for Ghostship)” [UPDATE]