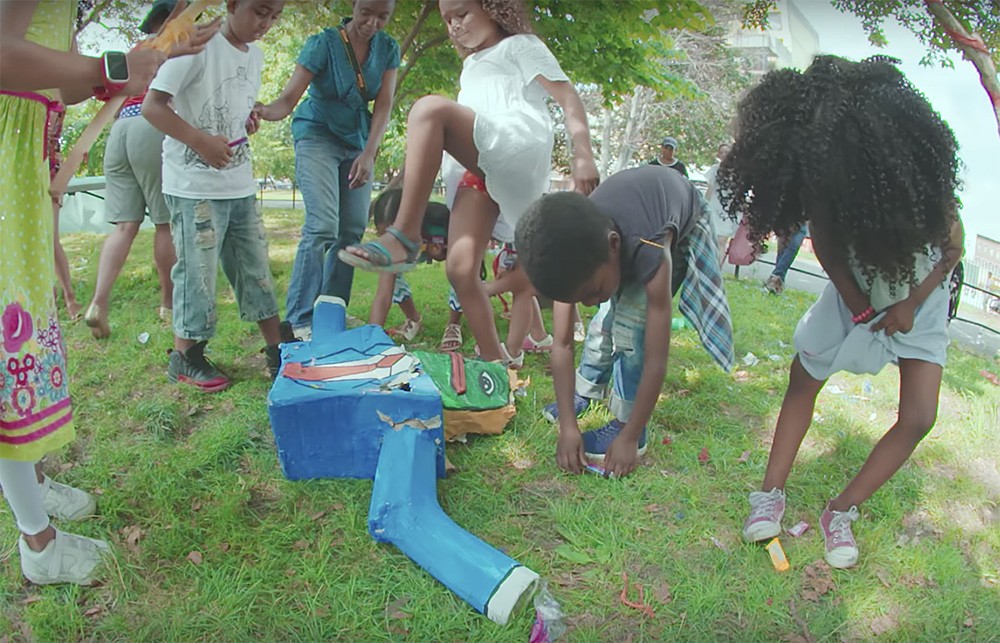 The Downtown Boys have released a new video for their Spanish-language song “Somos Chulas (No Somos Pendejas),” off of their first Sub Pop release Cost of Living. Appropriately, the video premiered on Univision’s U-Lab, a music innovation platform within the Spanish-language broadcast network.

The video, directed by Eavvon O’Neal, juxtaposes shots of the band’s energetic live performance with equally ferocious clips of young children hitting piñatas shaped like cop cars, brick walls, and one Pepe-like rendition of a certain POTUS at a birthday party. As with even the most politically-charged children’s parties, the video ends with an all-out birthday cake food fight.

Featuring a diverse cast of children and parents, the video sends a powerful message about back against everyday threats of racism and sexism in our current political climate. The Downtown Boys underscored the urgent need to address xenophobic and racist federal policies in their statement on the video:

“We hope you enjoy this video. Chulas are people who believe in the mergence of our past experiences and what we want the future to be. This mergence becomes our reality, and right now that includes a lot of pain and healing in our community at so many levels. We feel that the recent decision made by the white supremacist faction of our Federal government around DACA (Deferred Action for Childhood Arrivals) was not a decision based on economic justice for the USA nor based on advancing real immigration reform. It was based on racism against immigrants. We know a lot of people who like Downtown Boys, come to our shows, or listen to our music are affected by this. We also want to acknowledge the millions of immigrants that were never even eligible for DACA and face criminalization, deportation, and racism daily. We must continue to fight against all borders. Demonizing people of color and immigrants is not a solution. We know we can’t do much, but we can try to get as much information on this out there as possible. We urge anyone who is affected by the DACA decision or knows someone who is affected to look into United We Dream and the National Immigration Law Center. People have until October 5 to renew their DACA paperwork. Read more and find out how to get involved here.”

After finishing a string of US shows this week, The Downtown Boys are heading on an extensive tour of Europe, starting October 9 in Leffinge, Belgium. You can find a full list of tour dates on the Sub Pop website.