Like an oasis hallucinated inside a desert, Shamir almost seemed too good to be true. Here was an photogenic, angel-voiced millennial singing coy, sassy lyrics over gritty electronics, emerging through GODMODE, a NYC label more notable for releasing dissonant post-punk and noise music. Within a few months, he’d leveled up to indie heavyweight XL, appeared in an Apple Music ad, and released an acclaimed debut record—a shockingly fast come-up for an artist barely old enough to vote.

Too fast, probably. As the wait for his sophomore record grew, Shamir grew at odds with his label, who wanted him to release more of that fizzy electronic music, even though his natural interests laid in indie rock. When their partnership didn’t yield a satisfying record, they eventually agreed to part ways, a decision that led to Shamir recording and releasing the ultra-DIY record Hope, which did not at all sound like Apple Music. That decision led to a split with his management company, and then a brief institutionalization at a psychiatric hospital, where he was diagnosed with bipolar disorder, before he re-emerged intent on following his new sound, rather than retreating to the overstuffed bin of once-buzzy stars.

His new song, “90’s Kids,” is a little on the nose, pulling its title from BuzzFeed articles like “57 Things Only 90’s Kids Will Remember.” “We talk with vocal fry / we watch our futures die / In debt before we slave / but mom just thinks we rave,” he sings, over a twangy acoustic guitar and some hushed percussion. It’s “My Generation” for the meme generation, delivered in a video that slaps Shamir’s face over Salt Bae, Kermit sipping the tea, hipster Ariel, and many other viral images you won’t remember unless you, too, are a 90’s kid (or a 80’s kid and perhaps a 70’s kid, but close enough). The lyrics are a lot, frankly. I’m not so far from Shamir’s age—for the record, I’m an 80’s kid who graduated during a recession—that I don’t remember the anxious feelings he sings about, but the mistake you make of responding to a stereotype with anything but “fuck off” is getting stuck in a mud fight with people who don’t earnestly care about giving 90’s kids their due. (To Shamir’s credit, he literally sings “fuck you” in the chorus.)

But the song reintroduces Shamir’s most compelling strengths, namely that otherworldly voice and melodic instinct—the hair-raising way his voice speeds up as he sings “Put a drink in the air / for the college girls and boys,” or even the sad way he stretches out “boys.” Temperamentally, it’s close to “Demon,” the soft ballad from Ratchet that best sold his sentimental heart. It would score an Apple Music ad, and that it’s a song he actually cares about is more important. It’s enough to reinvest you in the idea of him making the music he wants for an audience, whether or not a big label cares. 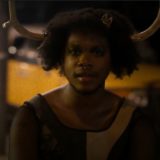