Grant Hart, former drummer, singer, and songwriter in legendary alt-rock band Hüsker Dü and a solo artist in his own right, passed away this week at the age of 56. Many artists have paid tribute to Hart’s legacy today, including his former bandmate Bob Mould, with a heartfelt note posted to his Facebook page. Numero Group’s Ken Shipley, who collaborated with Hart on assembling Hüsker Dü reissues and the upcoming Savage Young Dü box set, has shared his own remembrance of Hart today. In the essay, Shipley offers a funny and heartbreaking portrait of the drummer and songwriter during the past seven years, including through his undisclosed illness.

“Grant was tortured for sure, but he had a hell of a lot of fun bringing you in on the joke, even if you were part of the punchline,” Shipley wrote. He also shared a memory of following Hart to the “hidden” Minneapolis beach where he shot the cover of Hüsker Dü’s 1985 album New Day Rising. Read his full tribute below.

Grant Hart would have loved his own death. Furious text messaging in the middle of the night seeking confirmation and commiseration. Condolences from acquaintances and media outlets who haven’t come out of the woodwork in years. Emails from the Associated Press at 4:45am. The clamoring for details. When and where? What kind of cancer? He loved to stir the peanut butter. Actively sought the circus, metal or otherwise.

To know him was to…I’m not sure “love him” is the right choice of words. I had a ton of respect for the guy. I enjoyed his company. I certainly liked him. Is there a word to describe that region between love and like? It’s impossible not to love/like a guy who sends you a Bob Mould diss Some ecard at 2:47am. How can you not love/like someone who insists on a high end sushi restaurant for your first meal together and then promptly orders enough food to cover his next two meals. Grant was tortured for sure, but he had a hell of a lot of fun bringing you in on the joke, even if you were part of the punchline. 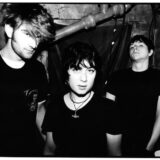 I began chasing him in the summer of 2010. Getting him on the phone was impossible: Call once, hang up, call again hang up. If he wanted to talk, he’d pick up on the third ring. Email was the best way to reach him, his replies speedy and thoughtful. I’d never even been to Minneapolis the first time we met in a dark, closed downtown hotel bar that he’d somehow finagled away for us to meet in. It was August-which in Minnesota means hot and muggy. He suggested a trip to the lake to cool off, and guided my rented P.T. Cruiser through residential twists and turns to a place I would later find out was called Hidden Beach by locals. We stripped down to our underwear and began wading out and were soon neck deep. He turned to me and asked, “Do you know where we are?” And I had no idea. “This is where I shot the cover for New Day Rising.”

It was one of those moments where you know you’re not the first to experience it, that he’d taken several people out swimming on Cedar Lake while the sun was setting and then used their connection to his past to cement a relationship. But it sure felt special in that moment. That was the real Grant Hart, disarming and masterminding all at once. He green-lit the project shortly after.

Things began arriving in the mail shortly after, with no rhyme or reason. An original print of the earliest Hüskers promo photo. The slides for Metal Circus. A CD-R of his long-gestating double album The Argument. A gigantic Land Speed Record poster. He was nothing if not generous. Grant came to town to play an under-attended gig at Martyr’s in the dead of winter, his alligator skin boots held together with duct tape barely keeping his feet from frostbite. On our break room table he sketched out what would become the first official Hüsker Dü project in more than 25 years and then asked to be dropped at the train station. A few days later, an email arrived:

“Great to see you this weekend. It could have been longer, the meal better, etc. But it was good. After recovering from the shock of the news I started to picture how I think the demos record should look. I see a very colorful, optimistic, almost new wave look. I think this will fit well with the material. As a nod to [Terry] Katzman I think calling it Savage Young Dü is good.”

The next five years moved at a snail’s pace. We somehow managed to get an expanded 2×7″ version of their debut single out, but with the band embroiled in a lawsuit the breaks were pumped on anything considered non-essential business. And yet, my relationship with Grant continued in the background. We traded messages every few months, almost always prompted by him. He always asked about my kids and somehow remembered my daughter’s name. “How’s Clementine?” he’d ask. He always called when he came to town, as if I was the only person he knew in Chicago. “I’m down at the train station, come pick me up,” he’d say. When asked why he didn’t give me a little notice on his arrival, he’d reply: “If you don’t know when my next gig is, you’re not paying close enough attention.”

We didn’t pick the project back up until late 2015. The emails were no longer in ALL CAPS. He was less erratic, more thoughtful. Something was different. I went up to Minneapolis in the spring of 2016 to pick up all the master tapes and files that he’d been threatening to let me take for half a decade, and while sharing a moment in the sun, he turned into me and said, “I’ve got cancer.” But he didn’t dwell. Instead he told me about the two wonderful developments in his life. He’d finally met someone worth staying with and he wanted to marry her. Her name was Brigid. And after many years estranged from his son, the two had reconciled and were speaking regularly. We hugged at parting, his stubbly face scratching my neck. When I got home, this was waiting in my inbox:

“By the way, I feel very positive about beating this thing in my guts. Your meditations undoubtably help. I have a whole monastery full of Carmelites praying thanks to Brigid’s mother, and yes…even doctors.”

As the box went into development his correspondence increased. “New old material is being discovered every week,” he wrote. “This will continue for the rest of MY life, at least. I insist that we proceed with what we have according to plan and not delay the November release while waiting for any Holy Grails to materialize.”

The last time I saw Grant was in March of this year. I was in Minneapolis to gather a few more bits and bobs and scheduled time to go to dinner. He wanted pizza and suggested Red’s Savoy in downtown St. Paul. He ordered enough to have leftovers the next day. He was a bit gaunt, but wisecracking and flirting with the waitress all the while. This time we shook hands at the end. He was too weak for a hug. When plans were made to fly out to the Museum of Pop Culture in Seattle to pour through his archives, he wanted to join. But when it came time to go, he suddenly cooled to the idea and withdrew from the project entirely. “Can you get it out before I go?” he asked.

I’m sorry we failed, Grant. We pushed as hard as we could to get this beast into the wild, but it wasn’t hard enough. You told me several times that you thought the material was subpar, that there were too many photos of Greg Norton, and insisted we change the title at the last moment just to see everyone scramble. And now it’s two months to the release date and everyone is sad and asking a million questions. It’s chaos down here and you’re probably looking down with your arms crossed, a gigantic, mischievous grin running ear to ear. Just a boy living on Heaven Hill.