Damn, This Is Fucked Up 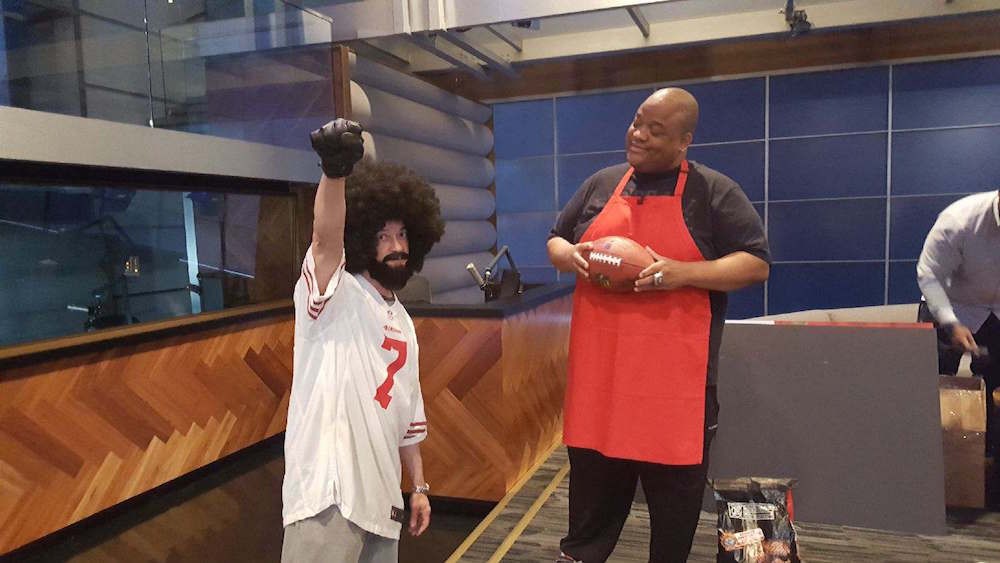 Noted sports doofus Jason Whitlock took a break from his groundbreaking work in cybernetic theory today to tweet a photo of himself grinning next to a man who at first appeared to be a white Colin Kaepernick impersonator. As a pundit, Whitlock is almost singularly fixated on black athletes who fail to meet his reactionary standards for behavior and self-expression. Naturally, Kaepernick–who made headlines last year for his protests against black oppression during the national anthem–is a favorite target of Whitlock’s scorn. Critics like Whitlock’s fellow Fox Sports host Shannon Sharpe rightfully took the stunt as an attempt to ridicule Kaep and anyone else with the gall to publicly stand against racism.

Part of the stunt, of course, was the light color of the guy’s skin. If he really were a white person, standing in a fake afro with his fist up like that would be a kind of blackface, bringing things up from dumb and distasteful to outright offensive. But as TMZ gleefully revealed today, the impersonator was Christopher Reid, aka Kid of ’80s/’90s goof-rap hitmakers and House Party stars Kid ‘n Play. Look back at the photo and it’s not hard to tell who you’re looking at.

Great to have Kap stop by the studio today. pic.twitter.com/2UPuyCdWdK

Whitlock is a proud troll, and you can safely assume he picked a light-skinned dude to help him because he hoped to get exactly this kind of reaction. But what does the ruse actually reveal beyond his own sad desperation to get a rise out of people? Colin Kaepernick is still speaking his mind unapologetically; Jason Whitlock is still an asshole. There’s one silver lining, though. It’s been 17 long years since House Party 3, and we’re just happy Kid is getting some acting work again.