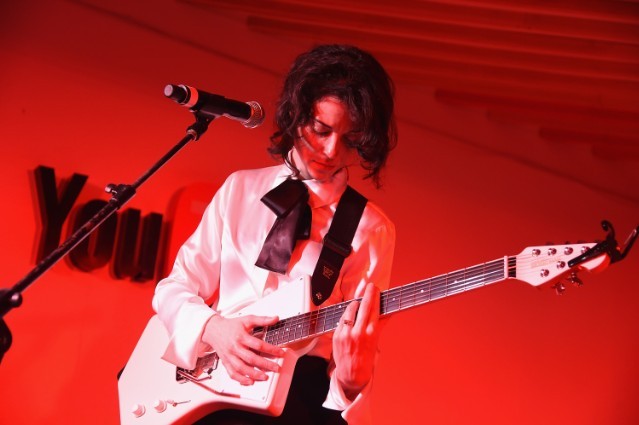 We now know the names of six songs on St. Vincent’s upcoming, still yet-untitled fifth studio LP. In an interview with the Guardian, Annie Clark discussed briefly how her 18-month relationship with supermodel Cara Delevingne may have influenced the songs on the album, which in addition to the previously released “New York,” will include tracks labeled “Smoking Section,” “Pills,” “Sugarboy,” “Hang On Me,” and “LA.” The Guardian also revealed a handful of lyrics from the album, including this amazing line from that last song: “How can anybody have you and lose you and not lose their mind, too?”

In addressing if these songs are about Delevingne, Clark responded:

I’ve always kept my writing close to the vest. And by that I mean I’m always gonna write about my life. Sometimes, in the past, I did that way more obliquely than now. But it’s almost like an involuntary reflex. I can’t help but be living and also taking notes on what’s going on, always trying to figure out how to put that into a song. And that does not mean there’s literal truth in every lyric on the way. Of course not. But I can only write about my life, and that – dating Cara – was a big part of my life. I wouldn’t take it off-limits, just because my songs might get extra scrutiny. People would read into them what they would, and you know what? Whatever they thought they found there would be absolutely right. And at the same time it would be absolutely wrong.

She also rightfully targeted the legitimacy of the question, noting that framing records as “therapy” is “erroneously gendered, in the sense that the assumption from the culture at large is that women only know how to write things autobiographically, or diaristically, which is a sexist way of implying that they lack imagination.”

You can read the full interview here.