I’m not sure how I feel about admitting this, but for the past three years, the only song that can push me through the last three-minutes-thirty-seconds of a hard run is Taylor Swift’s “Shake It Off.” What can I say—it’s catchy as fuck. The triple clap saves my tempo every time. If only there were a version with an extra chorus instead of the rap breakdown (this… sick… cringe!), I’m sure I could set a world record. Too late now, because I just replaced it with the new Kesha ft. Eagles of Death Metal song “Let ‘Em Talk.”

“Let ‘Em Talk” is a kiss-off, too. It’s the first blast of rock ‘n’ roll inspiration on Kesha’s cathartic, sappy, loopy, pious new album Rainbow, and as far as I’m concerned on release day, it’s the only one. It opens with a fast, fuzzed-out riff via EoDM’s Dave Catching, as Kesha busts her lungs: “You, you got your own opinions/But baby, I don’t even need to hear ’em.” It sounds like “Bad Reputation,” or like “What I Like About You,” specifically the bubblegum version from the Freaky Friday soundtrack. It’s got a shouty chorus and a millennial whoop.

Here’s the thing about “Shake It Off”: It is, like so much of what Taylor Swift does in public, an argument for her own superiority. “I never miss a beat,” she sings. “I’m lightning on my feet/And that’s what they don’t see.” She’s competent, goddammit—can’t she get some respect?

Kesha’s surely asked that question. In the years since she went public with abuse accusations against disgraced producer Dr. Luke, she’s defended herself within an inch of her life. Elsewhere, she makes effectively the same claim as Swift: “I write my shit!” she declares on “Woman.” The difference is that Kesha doesn’t sound like she needs to convince herself. She can hear everything you’ve said about her; she just isn’t listening anymore. She is past “haters gonna hate” and on to “fuck all that,” a phrase  Taylor Swift can’t say without first checking that Kim Kardashian isn’t recording her. 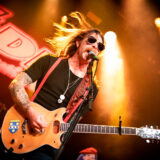 Back to “Let ‘Em Talk” for a second. It’s not perfect. It suffers a bit of radio-style dynamic range compression, meaning it doesn’t sound great until you turn it up. Fine, because you want to. You want to hear the gleeful subversion of Kesha’s promise to “go balls out,” her outrageous lip smack right after she tells “all the haters everywhere” to “suck my dick,” and the way the ever-phallocentric Jesse Hughes drags out the word “dick” like he’s singing in Cake. Eagles of Death Metal are a lot of things, but they are also exactly the feature choice if you need a rock ‘n’ roll band who authentically DGAF. Here, they pull through with the unmitigated joy required to yell, “We’re the kings, life is just our party palace.” It’s how the old hedonistic Kesha might sound if she’d been doing it her way all along.