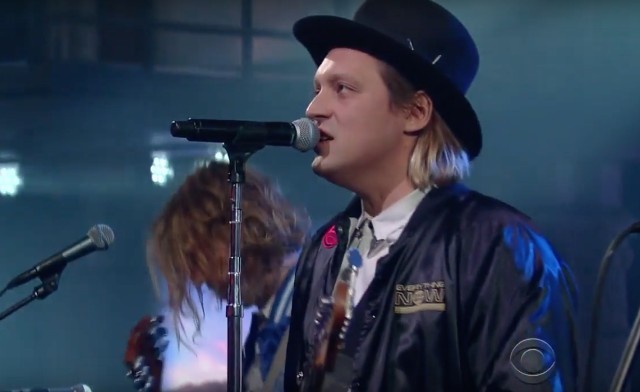 Arcade Fire have treated every aspect of the release of their new album, the not-exactly-beloved Everything Now, as a sort of performance-art stunt about corporate branding, and that apparently extends to late-night appearances. Last night, the band played on Stephen Colbert’s Late Show, and Colbert went along with all their culture-jamming stunts. Before the band played, he held up a can of their Chemistry energy drink and aired a fake infomercial for the Everything Now corporation, and on Twitter, he also shared the band’s fake list of demands. As for the performances, Arcade Fire played the album’s title track on the show, and they also did an online-bonus performance of their single “Creature Comfort.” They brought dry ice and keytars and made a whole production of it. Arcade Fire remain a ridiculously powerful live act, and these songs, performed by the whole army of them, gained a certain heft.

Check out the performances and the list of demands below.

What a bunch of tools… pic.twitter.com/arRi9dRxoy

Everything Now is out now on Columbia.