Former Crystal Castles frontperson Alice Glass has released a new single and video. Titled “Without Love,” it’s the singer’s first foray since 2015’s “Stillbirth.” The video is her first as a solo artist. The clip was directed by Floria Sigismondi, who’s worked with Perfume Genius, Bjork, and Katy Perry. Watch the video below.

Glass will also be hitting the road for a string of headlining shows and a handful of dates supporting Marilyn Manson. Those planned dates are as follows: 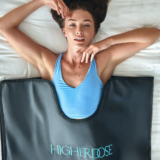 This Portable Sauna Blanket Is The Antidote To Post-Workout Soreness

Like “Stillbirth,” “Without Love” was cowritten and produced with former HEALTH member Jupiter Keyes. In 2014, after a public falling out in which Glass accused former Crystal Castles bandmate Ethan Kath of manipulation and abuse, Glass departed Crystal Castles and began releasing solo music. Her debut album is set to be released later this year.