Former Pink Floyd leader Roger Waters has been in the news a lot lately, mostly because of his criticism of Radiohead for their decision to play an upcoming show in Tel Aviv. Waters is a staunch Israel critic and supporter of the Boycott, Divestment, and Sanctions (BDS) movement, which advocates for withdrawing economic support for the nation over its treatment of Palestinian people. Now, in response to Waters’s stance, an official in New York’s Nassau County is threatening to take “appropriate legal action” against the operators of a local venue if they do not cancel an upcoming Waters concert, Consequence of Sound notes.

Officials in Nassau County, which sits on the western half of Long Island, passed a law earlier this year that prevents companies and individuals from doing business with the county if they support BDS. (New York Governor Andrew Cuomo signed an executive order to similar effect last year.) Last week, Republican county legislator Howard J. Kopel petitioned the county attorney to determine whether Nassau Events Center, the operators of Nassau Coliseum, would be breaking the law by hosting Waters for a pair of performances at the Coliseum in September. The coliseum is “a County sponsored facility,” Kopel said in his statement.

County attorney Carnell Foskey agreed that a Waters performance would violate the law, and is now lobbying Nassau Events Center to cancel the show. “By enabling Mr. Waters to perform, NEC has given Mr. Waters a forum or platform to express his BDS ideology,” Foskey wrote in a letter to the company that was obtained by Newsday.

There’s an irony here: by pressuring for a concert to be canceled based on the musician’s apparent alignment with politics they disagree with, the Nassau County officials are behaving a lot like Waters as they are condemning him. 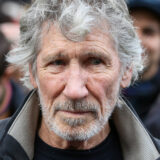 Waters has said he plans to move forward with the concert “I think they’re gonna fail,” he said in a Facebook Live video today, the Jewish Telegraphic Agency points out. “I don’t think, I know they are, because you would have to tear up the Constitution of the United States of America, particularly the First Amendment, and throw it into the Hudson River, or the East River if that’s closer, in order for that to happen.”