Of all the scams you could run to get free stuff, pretending to be Adele’s manager to score NBA players’ used sneakers or a birthday video from Katy Perry hardly ranks as the most practical. But it was the game being run by Justin Jackson and his wife, who are currently behind bars in Miami after prosecutors added new criminal charges against the pair on Tuesday (July 18) — two months after Jackson was arrested on charges that he impersonated Adele’s manager, in an attempt to score free tickets to a Kendrick Lamar gig at Miami’s Rolling Loud hip-hop festival on May 6.

Miami-Dade police provided Billboard with an arrest warrant filed against Justin Jayce Lii (his given name), 30 and his wife, Angel Lii, 26, on Tuesday, in which the pair were hit with a number of charges, including one of unlawful use of a 2-way communication device, three counts of organized scheme to defraud, 14 counts of criminal use of personal identification. The pair are being held on bond of $115,000.

According to the Miami-Herald, Jackson used email to pose as Adele manager Jonathan Dickins in an attempt to offer Adele concert tickets in exchange for sneakers from NBA stars Carmelo Anthony, Russell Westbrook and others, purportedly for a charity auction. Among the players who fell for the scam: Paul George and Richard Hamilton.

Police say he also created a fake email for soccer star Lionel Messi’s manager in his attempt to get more NBA sneakers, failed in requests to reps for Chris Brown, Tory Lanez and Katy Perry to get birthday wish videos for a “dear friend,” scored tickets and backstage passes for a Fabolous show, but failed to do the same for gigs by Carrie Underwood and Lauryn Hill. 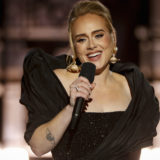 The pair were booked into jail on Tuesday afternoon, two months after they were originally arrested for posing as Dickins in an attempt to get tickets for the Lamar concert. Shortly after Jackson and Lii attempted to receive free goods using Dickins’ name, the real Dickins began receiving emails from other reps wondering what was going on. He reported the scam to Miami-Dade police more than a year ago, launching an investigation.

Busted as part of a sting in the Lamar incident, Jackson told an undercover detective that he was an assistant for Dickins who was “working with his important clients all day.” When Jackson, his wife and another woman showed up to pick up the tickets at a Miami park they were detained by police.

The Herald reported that Jackson has been accused of similar crimes in the past, including in 2007 when he served two years in prison after pretending to be a rep for Madonna and convincing a New York boutique to loan him $2.4 million in jewelry that he later sold at a South Florida pawnshop. He was also sued in federal court in 2014 after posing as Oprah Winfrey’s nephew, execs from her OWN network and President Obama in attempt to score free swag.