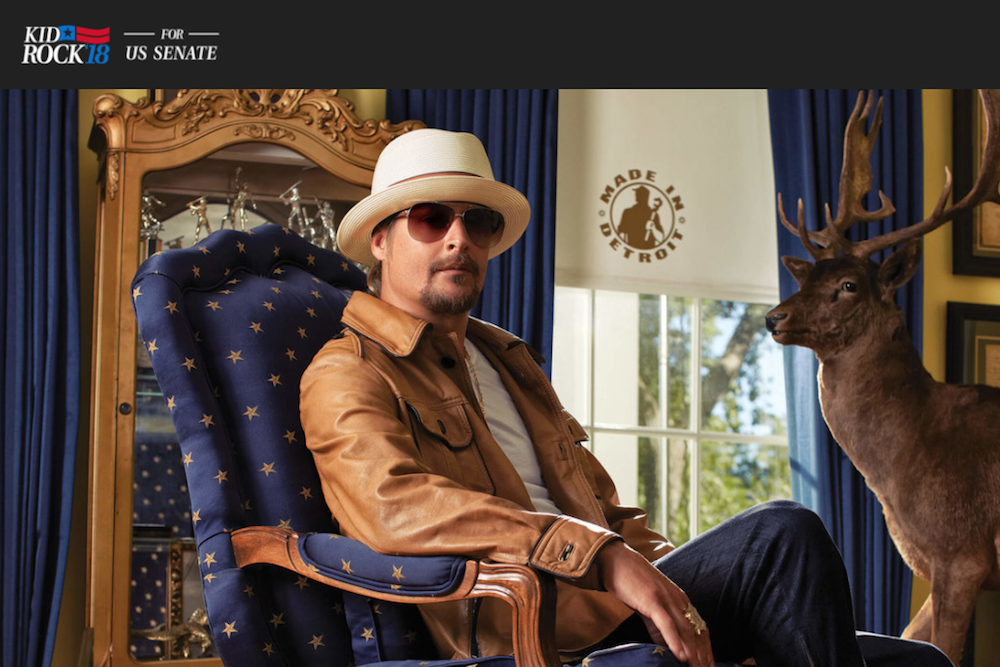 “I have had a ton of emails and texts asking me if this website is real…” Kid Rock wrote on Twitter today, linking to a site with the extremely ominous URL www.kidrockforsenate.com. He continued: “The answer is an absolute YES.” Allow yourself a brief moment of panic, and then read on.

Now, let’s think about the specific terms of the rhetorical question Mr. Rock posted in his tweet: Is www.kidrockforsenate.com a real website? Yes, of course it is. When you click the link, you’re confronted with a horrible image of the Kid sitting next to a taxidermy deer in a regally appointed office. The header says “Kid Rock ’18 for U.S. Senate.” A portrait of George Washington peers out from under the deer’s belly. You’re not hallucinating; Kid Rock isn’t lying; the website is real.

The more pertinent question is: Is Kid Rock really running for U.S. Senate? It’s not entirely out of the question. The Michigan GOP has said he’d make an “awesome” candidate for the 2018 race. But there are a few reasons to be skeptical. For one thing the man born Robert Ritchie has not filed any of the necessary paperwork to run with the Federal Election Committee. For another, as several people pointed out on Twitter, the website selling Rock’s supposed campaign merch is on the URL of Warner Brothers, his record label–which at the very least seems like a violation of generally accepted propriety about campaigning. Lastly, the website doesn’t even explicitly say what state he’d be running to represent. You’d assume that if it’s his home state of Michigan, he would probably make that clear were he seriously running.

On Facebook, Rock posted a slightly expanded version of the message, writing that he will give a “major announcement in the near future.” It’s possible that he’s really going to run, but given the pile of inconsistencies, it seems just as likely this is some bizarre promotional scheme for a new album. Either way, he’s welcome at the White House any time.