If Kid Rock is serious about running for Senate–and it seems like he might be–Americans can prepare for a long year of journalists and Democratic oppo researchers finding and publishing every detail they can find from his past. It will be an entertaining and eventually exhausting ride. And after Donald Trump’s still-shocking presidential win, no one knows whether any of the obvious reasons why the Kid would make a very bad federal legislator will actually keep people from voting for him. With all that in mind, we might as well get started on the dig, with the time our future leader got a blowie on film while enjoying some groupies alongside Creed singer Scott Stapp.

The year was 1999. Kid Rock was riding high from the success of his enormous fourth studio album Devil Without a Cause, released a year earlier. Depending on the exact timing–which isn’t precisely clear–the biggest Christian rock star of the ’90s had either just released or was about to release Creed’s similarly massive second album Human Clay. According to news reports, the two acts were on tour together at the time, suggesting the American Badass’s adult film debut came after one of two Florida shows in late December, which featured Kid Rock and Creed opening for Metallica. (We haven’t been able to find documentation of a larger tour.)

The tape itself isn’t easily found online, but the website Lost Media Archive has a few screenshots. These show two men clearly recognizable as Rock and Stapp, in the company of two women. Stapp is smiling and shirtless; Rock looks like he’s about to be. Here’s Lost Media’s brief description of the tape’s contents:

The tape in question involves the two partying, getting completely drunk and having their groupies performing oral sex on them. The only other thing that is known about the tape is that at some point Scott Stapp utters the phrase “It’s good to be the king!”. 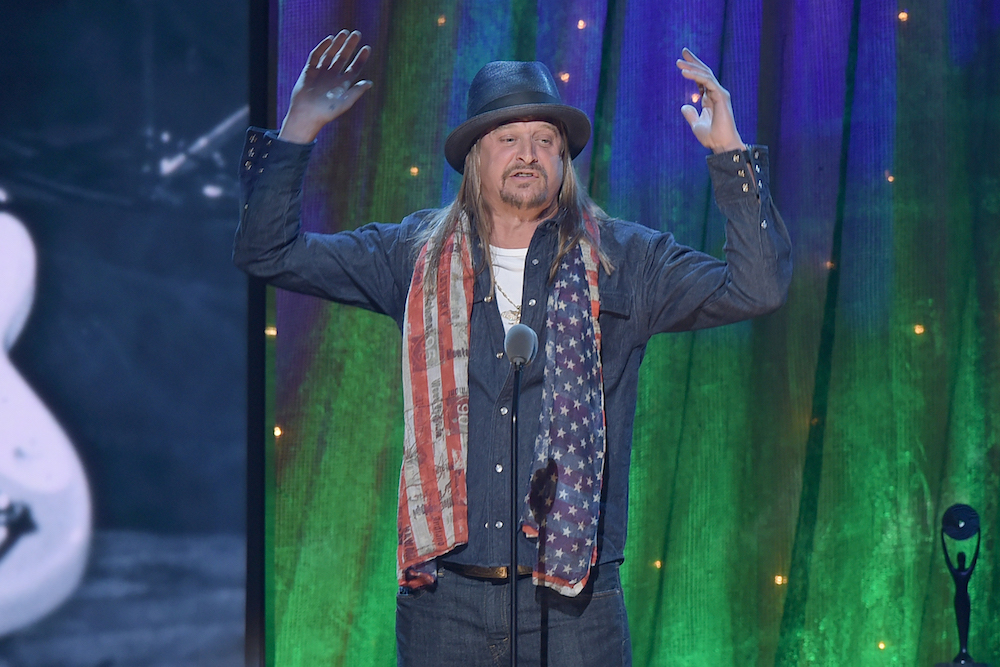 The video stayed in Stapp’s private stash until 2006, when it somehow found its way to the distributor Red Light District, which was also responsible for publishing Paris Hilton’s sex tape. (Stapp claims a copy was stolen from his house at some point in the intervening years.) In a 2006 interview in which he touted the the tape to Billboard, Red Light District president David Joseph seemed to believe a release was imminent. “This wasn’t just shot by one person — there were a lot of people holding the camera,” he said. “Because of that, it’s not necessary that we need [Rock and Stapp] to sign off on this. We left messages for them but they didn’t respond, so maybe they didn’t take it seriously.”

For reasons that are unclear, the tape never received an official release, and a 40-second preview originally published online by Red Light District has since been deleted. However, the damage was done–at least as far as Stapp and Rock’s friendship was concerned. Here’s what Stapp had to say about the debacle in a 2009 interview with SPIN:

The video was shot in 1999 and then stolen and released in 2006. How difficult was that for you? What sucks about that is Bob — Kid Rock — and I were friends. He’d been over to my house and we jammed and hung out. We were in Tampa playing with Metallica, and I walked into his trailer and there were some strippers. It’s a time in his life and a time in my life that we’d like to put behind us and not publicize because we have children now, and they’re in school, and their friends read. I know he was pretty pissed off at me when that came out.

Have you spoken to him since?
We haven’t sat down face-to-face. I did apologize to him that I didn’t just burn that thing. I thought that was a skele-ton in the closet that would never find the light of day.

Publicly at least, Rock seemed unperturbed. When an interviewer asked him if the tape bothered him in 2007, the singer said his fans weren’t surprised that he’d been caught on camera with groupies–they were upset that he’d be caught dead hanging out with a guy like Stapp.

If Rock–born Robert Ritchie–really runs, he’s got a pretty good shot at taking the Republican nomination in his home state of Michigan. Whether he stands a chance of beating the incumbent, the locally beloved senior senator Debbie Stabenow, is another story. One would think that the existence of the Stapp sex tape is at least some kind of net negative for his chances. But after big recent wins for Trump following his “pussy grab” controversy and Montana congressman Greg Gianforte after he chokeslammed a reporter, you never know.