Joe Scarborough Wants to Be America’s Next Great Political Troubadour

Whither the protest singer? Decades after Dylan went electric and Phil Ochs kicked the bucket, where is the guitar-playing white man who will trenchantly and poetically chronicle our perilous political moment, with lilting melodies and rakish good looks to boot? Most days, it feels like rock and folk music have outlived their political relevance, with all the real action happening in hip-hop.

But last night, on The Late Show With Stephen Colbert, I saw my rock’n’roll past flash before my eyes. And I saw something else: I saw rock and roll future, and its name is Joe Scarborough. And on a night when I needed to feel young, he made me feel like I was hearing music for the very first time.

Just kidding! It was pretty bad. 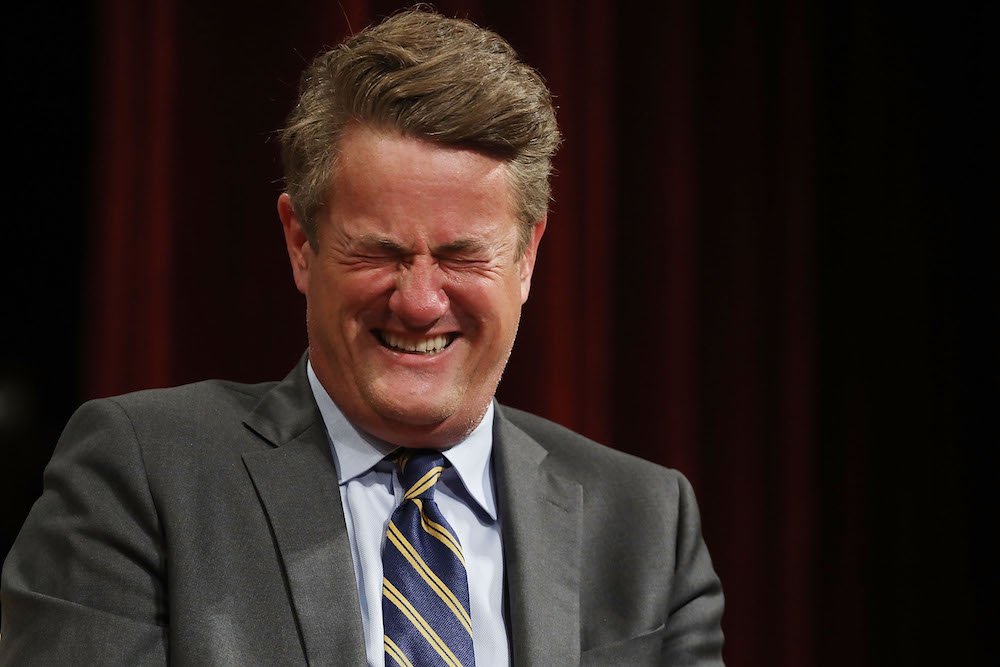 Scarborough–performing with his band, Scarborough–performed a song called “Welcome to the Monkey House,” which sounds a little like “Summer Nights” from Grease, as rewritten by a guy who drives around with a “Stop bitching, start a revolution” bumper sticker stuck to the back of his car. Scarborough released the studio version this morning, and sent a press release to reporters touting it as an “up-tempo rock anthem” that “addresses our current political climate.”

Some sample lines: “Everybody’s a little crazy / in the monkey house / The gods are crazy and we’re too lazy / Don’t bother breaking out / Feel the chaos in short order / Celebrate your new disorder.” As far as American anthems go, it’s not exactly “Blowin’ in the Wind.”

Scarborough and Mika Brzezinski, with whom he cohosts MSNBC’s conservative morning show Morning Joe, have been in the news a lot lately, thanks mostly to their theatrical ongoing feud with president Donald Trump. After becoming one of the then-candidate’s earliest boosters during the campaign, Scarborough is attempting to rebrand himself as a Reasonable Republican icon of #TheResistance, taking every possible opportunity to publicly criticize Trump. In an interview with Colbert before his musical performance, Joe made much ado about leaving the Republican Party to become an Independent. ““How far are they willing to go?” he asked. “How much of this country and our values are they willing to sell out?”

Lord knows the president, and the GOP, deserve all the opprobrium they get. But it’s a little difficult to stomach coming from Scarborough, who once got a public thank you from Trump for being a “supporter” after his show declared the future president a serious candidate and provided him with a wealth of free airtime in the form of multiple Morning Joe appearances. And Scarborough, a former congressman whose legislative record included support for increased abortion restrictions and Newt Gingrich’s plans for things like cuts to welfare and harsher federal prison sentences, is far from a paragon of liberal values.

At first, I though Scarborough’s public charm offensive could be the lead-up to another run for public office. Now I wonder whether he’s planning a pivot to lukewarm protest singing full-time.