HAIM‘s long-anticipated sophomore album Something to Tell You is out today, and what it has to tell you, in essence, is not so different from what the trio had to tell you four years ago with their debut Days Are Gone. The tweaks to the band’s sound are normally pleasant, depending on how you feel about electronic ephemera and odd, pitch-shifted versions of the HAIM sisters invading their normal pleasant, balmy retro-pop. These glitchy flourishes place us firmly in pop music’s present day, as well as conjuring images of Este, Danielle, and Alana sitting around getting high to 22, A Million or maybe Laurie Anderson.

I once said to a friend (and thankfully refrained from bearing out this idea in writing) that one could reasonably pair every track from Days Are Gone to a reminiscent track on Fleetwood Mac’s 1987 album Tango in the Night. But “You Never Knew” makes me believe that the likes of “Forever” were only the beginning of HAIM’s mining of that source material. Here the bright, spidery, acoustic guitar bursts, straight out of the Lindsay Buckingham playbook, are perhaps the most immediate signifiers, especially when paired with a soft, slowly-arpeggiated synth and a gently assured, very-Christine McVie-esque vocal performance from Danielle Haim. It’s worth noting that Danielle also intercuts her delivery with a couple of breathy, talk-sing throwaways which, against some choice dramatic guitar down-strums, bring Dire Straits’ Mark Knopfler to mind for a weird moment.

The track, as HAIM clarified in an interview this week, is a co-written collaboration with Dev Hynes (aka Blood Orange), by now a seasoned pop co-writer as well as singer-songwriter in his own right. As he did with “All That” on Carly Rae Jepsen’s E•MO•TION, his influence–brackish guitar punctuation, faintly pneumatic synths, and breathy, sensuous vocal phrasings that add an easy funk sensibility to an otherwise fairly on-the-nose pop song–pair excellently with the Haim sisters’ songwriting tics. As in “All That,” the melancholic chorus here becomes an ad infinitum mantra at the end of the song; the band is pulled out and dropped back in again as the vocal drone on and build (“Was my love too much for you to take?/I guess you never knew what was good for you”). The definitive chorus feels like a mixture of the Haim sisters’ own trademark rapid-fire, percussive vocal lines and Hynes’ own definitive ability with crafting a hook.

There’s a sense of effortlessness here, mixed with a subtle complexity, which conjures the influence of the easiest touchstone for most of Hynes’ music: Prince. (There’s even some parallelism with one of Hynes’ best could-be, Prince-derived pop singles, “You’re Not Good Enough” in the titular line and its melodic contouring.) By Danielle’s account, the song came together in roughly an hour, which is not surprising when you consider the economy of the basic melody and structure. There’s no need to complicate a good idea. The bells and whistles of arrangement and syllabic excess which characterize some of Something to Tell You‘s other tracks are absent here. Sometimes a great centerpiece can provide a perfect contrast that reflects back positively on the rest of record, throwing it into more meaningful definition. On an album that blurs pleasantly together on the first few listens, “You Never Knew”‘s clear-eyed melancholia sticks out. 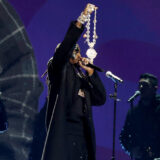