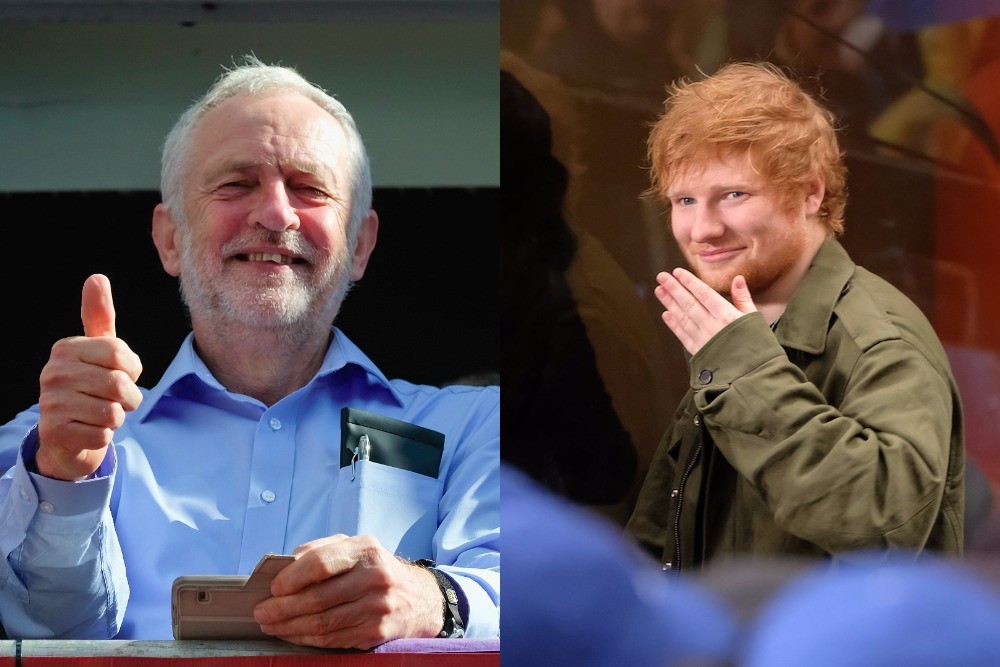 Leftists disheartened by Brexit and Donald Trump’s election were given some cause for celebration with the recent UK snap election, in which British prime minister Theresa May brutally played herself by losing the Tory parliamentary majority thanks to Labour leader Jeremy Corbyn’s groundswell of support. Corbyn is something like the British Bernie Sanders: a slightly frumpy yet incredibly charismatic old man whose distrust of state power and boosterism of progressive economic policies has made him a champion to younger people accustomed to choosing between gormless centrists and unabashed fascists. His success as the head of Labour—and with it, a long shot possibility to become the UK’s next prime minister—has raised hope that if you champion humane policies and ideas in the public sphere, people may come along with you, instead of voting to shoot themselves in the foot.

You know who’s a Jeremy Corbyn supporter? Ed Sheeran. In a new interview with Q, Sheeran was insistent on his preference for Corbyn, opposed to May and her cronies. “People on Twitter keep calling me a fucking Tory!” he said. “I don’t know where that came from. Make it clear that I’m a big Corbyn fan.” (His pal Stormzy is a huge Corbyn fan, too.)

He also voiced dissatisfaction with Brexit, though he had to push himself. “See, that’s the thing. I don’t get involved in politics,” he said. “But I will say one thing: I was born a European and I fucking love being a European. You can probably guess my answer from that.”

Is it surprising that Sheeran is a Corbynite? I don’t know, maybe. He’s mega rich, and the mega rich love to be conservative. Emotional generosity aside, his songwriting is occasionally built around reductive stereotypes for men and women, potentially making him someone who thinks there’s a “right” way to live. You know, like the type of guy who says “men are like this, and women are like that.” Nobody’s like anything, Ed! What’s a “Galway Girl” but an easy collection of tropes and expectations? But anyways: Sheeran should campaign for Corbyn during the next UK election, which is scheduled to be held in 2022, right around the time “Shape of You” drops out of the top 10. [NME]