On Friday, Fleet Foxes‘ Robin Pecknold hopped in the comments at Stereogum’s Premature Evalution review of their new album, Crack-Up, to quibble with our pal Tom Breihan’s read on the record. Breihan’s essay, which gives a mixed-to-negative review of the album for the intellectual inwardness of both its lyrics and sprawling songform, inspired Pecknold to write about how he views about his own place in the landscape of contemporary pop music. He had some interesting thoughts on the question of whether Fleet Foxes are “relevant,” as we’re almost a decade past the heyday of the ambitious indie rock they make, and tied it to the open debate of whether a Straight White Male perspective can be truly crucial in 2017:

Also. Speaking as a Straight White Male music listener, I’d say, generally speaking, that the Straight White Male is the last voice of “cultural relevance” that I’m actively looking to, or sympathetic to, in this particular cultural moment. Just, who cares, you know? This obviously creates a problem for the Straight White Male artist who still desires to make relevant art – do you attempt to gentrify the landscape, White Savior yourself, and demand through inference or testimony that your voice is that of a leader for these times, when your phenotype is culturally inert if not malignant, and that even presuming to have something genuinely important to add is arguably an invocation of privilege? This approach seems like a fool’s errand to me.

He then named the contemporary artists he finds most inspiring: “You obviously care enough about music to place musicians in positions of veneration, and I do too, but I’m sooner doing so with Frank and Kendrick and Solange at the moment than I am with any straight white male artist currently in the landscape, and obviously (duh) I’m not alone in that, as they are enormously successful, beloved, and influential artists.”

Pecknold also specified that several of the songs on the album were directly inspired by the current American sociopolitical landscape: “‘Cassius’ is explicitly about participating in protests following the murders of Alton Sterling and Philando Castile last summer, as well as the death of Muhammad Ali. ‘If You Need To, Keep Time On Me’ and ‘Crack-Up’ are about post-election confusion and anxiety, alternative facts, as are portions of ‘Third of May’ and ‘I Should See Memphis.'” 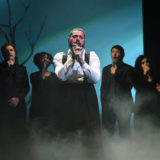 Pecknold discusses his preferences in the methodology of record reviews, and some additional information about his process on Crack-Up. It’s definitely worth a read, as is Breihan’s review. Check out the piece here, and Pecknold’s comments below.