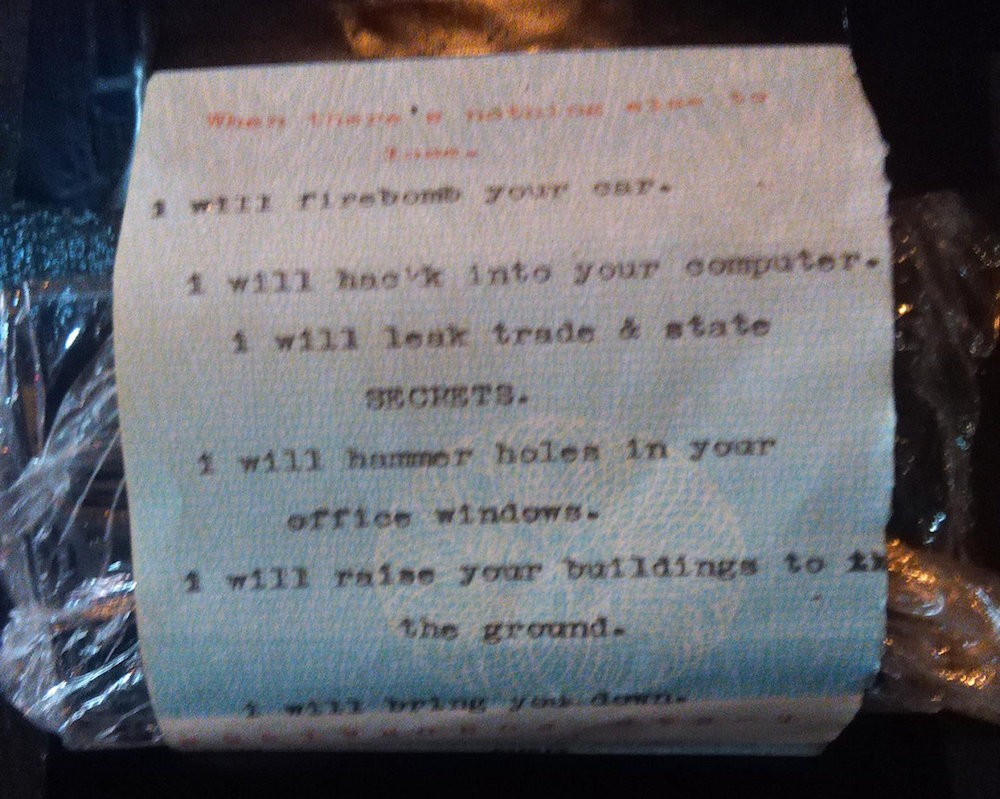 On Friday, the New Zealand city of Dunedin shut down and evacuated much of its central business district over what was believed to be a bomb threat, based on a package with a vaguely menacing note that had been attached to the wall of a former strip club building. The package turned out to be something far less frightening: the latest cassette by a local noise/drone outfit called LSD Fundraiser.

According to the Otago Daily Times, the New Zealand Defence Force’s explosive ordnance disposal squad was brought in by helicopter on Friday afternoon after the discovery of the package, and destroyed it in a controlled explosion. (The Daily Times has some footage of the bomb-diffusing robot at work.) Authorities were alarmed in part because of a note attached to the cassettes, which read:

“When there’s nothing left to lose.

i will firebomb your car.

i will hack into your computer.

i will leak trade & state SECRETS.

i will hammer holes in your office windows.

i will raise [sic] your buildings to the ground.

i will bring you down.”

This screed, it turns out, is the cover art for LSD Fundraiser’s tape StreetNOISE, which they apparently released via the unconventional method of just sticking it on a wall somewhere. On Bandcamp, StreetNOISE has an attached note: “Free giveaway! On a wall hear (sic) you? limited run of XIII, C38, cassette tape. Longslowcomfortablescrewagainstthewalltapes #5″

Rather than an actual threat, it seems like LSD Fundraiser was just going for some punk-rock guerrilla publicity. They likely got more than they bargained for: the Daily Times reports that one 43-year-old man has been charged with threatening to destroy property in relation to the incident. He’ll appear in court later this week.

If you’re so inclined, you can listen to StreetNOISE via Bandcamp below.