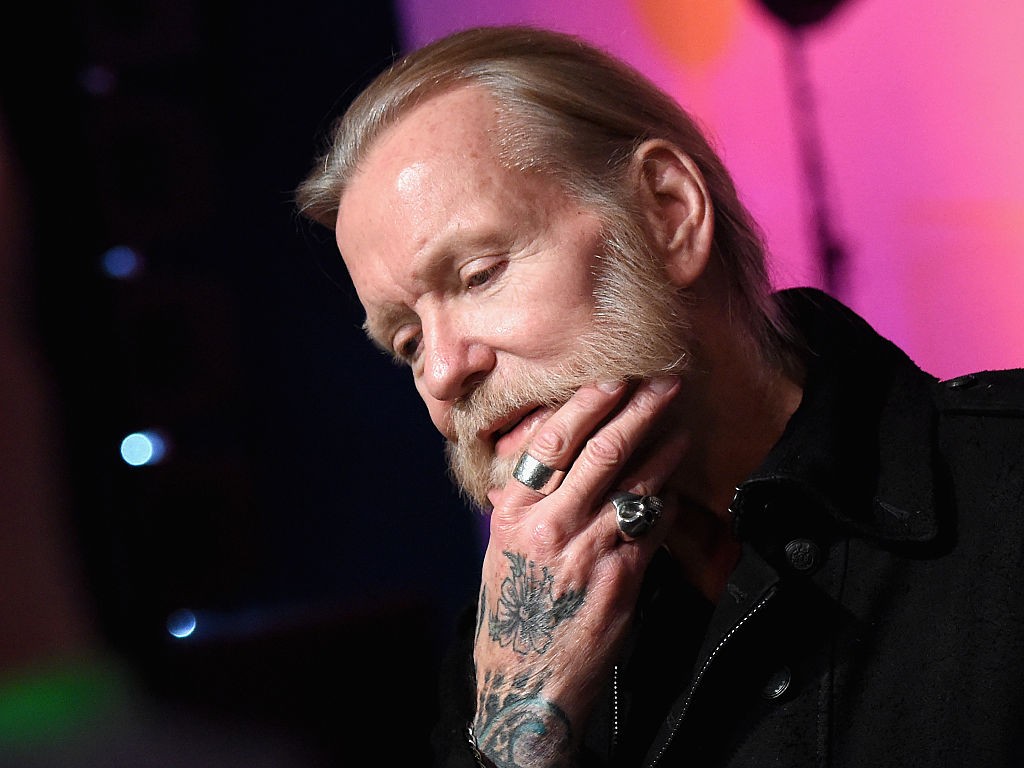 Saturday afternoon, May 27, the passing of Southern rock virtuoso Gregg Allman was announced to the world. He was 69, and had struggled for years with health issues, including a hepatitis C diagnosis and a liver transplant. A statement on his website said he passed away “peacefully” in his Savannah, Georgia home.

It is with deep sadness we announce that Gregg Allman, a founding member of The Allman Brothers Band, passed away peacefully at his home pic.twitter.com/8g0pAT3kky

As news of the death spread throughout the music and entertainment world, friends, colleagues, journalists, and admirers paid tribute to the founder of The Allman Brothers Band. His ex-wife, Cher, was among the many to post remembrances to the hard-living rocker. Dozens of others across the spectrum of performers added their thoughts and memorials. Read on below.

He showed me his tattoos… his voice…. his soul. #GreggAllman pic.twitter.com/pGhgyhjcMV

My heart breaks today at the passing of soul brutha Gregg Allman. Blessings and peace to all the Allman family. – KU

So sad to hear Gregg Allman passed away I admire him so much & had the honour of jamming wth him recently. A gentle soul with so much soul.

I'm so very saddened to hear of the passing of rock & blues legend Gregg Allman. He was such a huge influence on me. https://t.co/rSbHdmj5yp

Thank you @GreggAllman… for the inspiration, and for those many holy nights on stage. pic.twitter.com/FV6Qn5zXeE

Goodbye, Brother Gregg. When @amandashires was pregnant, @GreggAllman pointed at her belly and said "It's gonna be a girl. I'm never wrong."

Thank you @GreggAllman for touching our souls with your music. pic.twitter.com/YzF8lpShaT

Gregg Allman… very sad day for rock 'n' roll… a great singer and writer. He could flat out sing. His music will live on! – Huey

Saddened to learn that the great musician Gregg Allman has passed. Had a good time interviewing him at length, learned a lot. #RIPGregg

It's all just too much. #GreggAllman Rest In Peace Midnight Rider pic.twitter.com/h3sWHTEXzN

What a legacy @GreggAllman leaves behind. Jam on in the great hereafter.

RIP Gregg Allman, what a voice… Listening to Allman Brothers "Live at Fillmore East," a record that never gets old.

thanks for your life, Gregg Allman. pick up your gear and gypsy roll on.

In addition, several of Allman’s bandmates posted tributes to him on Facebook.

It’s too soon to properly process this. I’m so glad I was able to have a couple good talks with him before he passed. In fact I was about to call him to check and see how he was when I got the call. It’s a very sad thing. I, along with the entire Great Southern family, pass along my deepest sympathies to Gregg’s family, friends, and fans.

RIP Gregg Allman – I am at a loss for words. I was moved by Gregg’s voice when I first heard the Allman Brothers Band in 1969. I was nine years old. I had not even picked up a guitar yet but thanks to my to older brothers I had been exposed to a lot of great soul music with the best singers in the world. But this was something different. This music was making a deep emotional connection with me even though it was too complex for me to really understand. Somehow, though, it had this “common man” quality that allowed that music to connect with people on so many different levels without analyzing the ingredients that went into it-soul, blues, rock, country, jazz-all mixed together in a way no one had ever done before. And on top of it all was this beautiful voice that could be soothing, terrifying, mellow, angry, and amazingly natural and soulful all at the same time-and instantly captivating. It drew me in. It drew us all in.

Over the next few years I would begin to play guitar as everyone of my music loving friends became Allman Brothers’ freaks. That music spoke to anyone who heard it but in the South it resonated with us. It spoke volumes. It brought a voice to people like myself in the midst of some confusing, ever-changing times. Here was this group of Southern hippies with an integrated band coming out of the Deepest South with equally deep music on the heels of some extremely deep changes. We didn’t realize how heavy that was at the time but we sure realized how heavy the music was. Every guitar player in every Southern town was listening to the Live at Fillmore East record and worshipping at the altar of Duane Allman and Dickey Betts. But the icing on the cake was always Gregg’s voice. That’s what separated the ABB from being a band that only connected with music freaks. Women whom previously had only listened to the radio would tolerate the long jams to get to the parts where Gregg melted their souls with that angelic voice. It turned casual music fans into fanatical fans who were discovering a new multi-dimensional music that a few years prior wasn’t even in existence. And it was all due to Gregg’s voice-and the songs.

He wrote these amazing songs that were as natural as his voice was. The words and melodies felt so perfectly unpretentious and, when delivered by him, made an emotional connection that only happens when music is genuine and honest. I learned an enormous amount about singing and songwriting from him-most of it before we ever met.

I am truly honored to have been fortunate enough to have written many songs with him and equally honored to have traveled the world with him while making the best music the world has ever known. I will never, ever take that for granted. And on top of all that-he was my dear friend.

My fondest memories will always be of Gregg, myself, and Allen Woody sharing a tour bus together-listening to great music and laughing our asses off mile after mile. Traveling- like life- is so much better when you’ve got friends to share the experience with. I’ve lost too many lately and this one is gonna be hard to get past. There is some comfort in knowing that millions of people all over the world feel the same way.

I love you Gregory – WH

Gregg Allman was not only a friend and brother, but he was a strong inspiration to me very early on in my career. I used to go see the Allman Joys at the Fort Brandon Armory in Tuscaloosa, Alabama when I was a young aspiring musician of 13 and 14 years old. He mesmerized me with his talent…that incredible voice, his understated yet strong stage presence. As he developed as an artist and songwriter, I continued to follow his career…and when the Allman Brothers Band was formed, I thought…”Now they have figured it out…” That first record was ground-breaking and a new style of music, Southern Rock, was born. Little did I think at the time that I would be so fortunate to eventually be a part of it, I was just a fan and admirer of what he, Duane and the rest of the band had done. Opening up for the ABB in 1970 and ‘71 when I was with Alex Taylor and later with Dr. John, I would hang around after our performance and listen to them. Sometimes, when the piano I used on our set was pulled back to the back part of the stage, I would sit there at it and play along with what the ABB was doing. It was just for my own enjoyment and to try and learn…but it gave me a chance to get a feel for the incredible music they were producing.

After Duane’s tragic accident and death, I admired how they went out with no replacement for Duane…as a five-piece band, knowing that they were emotionally and physically drained from the loss. But they did it so admirably…Dickey did himself proud to take on the role of now sole guitar player, and I have always admired him greatly for that. All of the band did what had to be done, and it had to be painful and difficult, but they did it with grace. It wasn’t long after that tour that the band decided to take a break and that Gregg embarked on his first solo effort. I was so fortunate to get the call from my pal Johnny Sandlin to play on that project, and as a then 19-year old keyboard player trying to find his way, it was the dream offer of a lifetime. Playing on “Laid Back” was a life changing experience for me, but even more was to come, when the jam sessions after hours with the other members of the ABB resulted in me being asked to join the band.

During that time, Gregg was much like a big brother to me, as Dickey was in his own way. Gregg was always gracious to me…making sure I was included in everything from photo sessions to various parties and events…and even sometimes asking me to accompany him to events not related to the band’s duties. We finished recording “Laid Back”, and soon after, “Brothers and Sisters”…and these are probably the two records that I am most proud to have my name on. Both garnered strong success, and I found myself in the middle of a whirlwind over the next several years.

As we know, that whirlwind eventually resulted in changes for all of us in the band. But through all the changes that were to come, Gregg and I remained friends and he was always kind and gracious to me.

In 2014, I was more than pleased to get the call to be in the core band to pay tribute to Gregg at the Fox Theater in Atlanta. The result was the presentation, CD and DVD called “All My Friends”. It was such a fitting homage to Gregg, and I was honored and thrilled to be there for him. But also during that time, I had personally been asked to put together a special program for the Atlanta Symphony Orchestra at Symphony Hall. I reluctantly asked Gregg if he would participate, and without hesitation, he agreed. That was one of the most special and memorable shows I’ve ever done, and Gregg’s participation certainly made it a major event. That just shows the kind of friend Gregg was. He certainly didn’t have to do that, and he didn’t take a dime for his participation.

Thank you, Gregg…for your inspiration, for your talent, for your loyal friendship and for the amazing human being you are. I am forever grateful for my relationship with you, for sharing the stage with you so many times, for the honor of recording with you on some records that have stood the test of time. You will always be my hero and I am your biggest fan. Rest easy, my Brother.