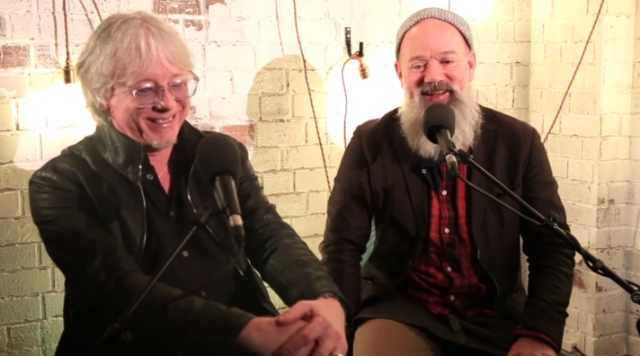 The hallmark of Michael Stipe’s post-R.E.M. life has been a gargantuan beard that makes him look like a weary deep sea fisherman. So when Stipe and former R.E.M. bandmate Mike Mills went on BBC show The First Time With…, host Matt Everitt couldn’t help but ask Stipe about his facial hair. First off, Everitt inquired about the origin of the beard, to which Stipe replied:

Everitt then asked, “Do you use much product on it, or is it just pretty natural?” After wondering aloud, “Are you really asking me that?” Stipe went on to actually explain his beard-care regimen:

I wash it with shampoo, and I’ve tried conditioner, but it doesn’t condition very well. I’m kind of going for — rather than skid row Santa, I’m kind of going for a Poseidon-slash-Zeus-slash-Brancusi, uh, Matisse kind of appeal. And so I keep it a little trimmed on the sides to show off my beautiful cheekbones. And that’s about it, really. I put some oil on it from time to time.

Watch the full exchange below.

Stipe also told a story about meeting David Bowie in Switzerland while waiting to find out if R.E.M. drummer Bill Berry would survive an aneurysm he’d suffered on stage, which is quite a lot more interesting than the beard stuff to be honest:

And Mills spoke candidly about the decision to end R.E.M. in 2011: