For their new music issue, Teen Vogue tapped two of 2017’s biggest stars: Chance The Rapper and Jordan Peele. Writer/director Peele smashed box offices with his thriller Get Out, as Chance’s lauded streaming-only project Coloring Book earned the rapper three Grammy awards, becoming one of the most successful independent artists of our era.

In the interview, Chance reflects on everything from his achievements to his experience working with Kanye West. Check out the excerpts from Chance The Rapper’s Teen Vogue interview below.

On Coloring Book’s success: When I was working on Coloring Book, I knew that I wanted it to be a beacon for independent artists and music makers with their own agenda. I didn’t know exactly how large the impact would be. But [because of] the light and the purity of the album — what I was trying to show people — I realized there was a lot of work that would go hand in hand with it. That’s what kind of led me to become more involved in the schools and in my church. It’s cool to say things, but if you can do it, [that] makes it real.

On his studio experience with Kanye West: He’s very big on multitasking. We’ll have a studio rented out, and he’ll bounce between rooms working on different songs, writing for a second or adding or subtracting productions. He’ll also put a bunch of people in a room that he thinks might have good ideas and try to see what they come up with. 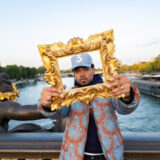 Twenty-five percent of it is productive ideas flowing and then 75 percent is lectures from Kanye, where he tells you exactly how he views the world — just very straight Kanye, honesty that definitely gets your creativity and strong opinions out on the floor. I think it helped me find myself. I’m a young dude from Chicago who grew up with Kanye as my image of hip-hop. Finding your voice in a room where you have to challenge Kanye is scary — but it’s also life-affirming.

On being labeled a “Christian rapper”: One of my biggest fears with Coloring Book was that it would be labeled. I hate labels. I never sought out for people to recognize it as a gospel album. I don’t make Christian rap, but I am a Christian rapper. When I was going out and trying to fully give glory to God, in my setting, I feared that people would be dismissive of it, like, “This is Christian rap, I’m not trying to hear it.” But it’s the total opposite: People were very accepting of it.

Whether they say, “I’m an atheist, but I love Coloring Book” or they say, “I’m so glad I was able to get closer to God through this project,” people had formed opinions about what I put into the world. I think that’s always the goal of art, is to make people ask themselves questions. Like Get Out!

On today’s “age of instant information”: The problem is that my generation was pacified into believing that racism existed only in our history books. Now we’re in the age of instant information, where just looking at Twitter we can find out that unarmed people of color are being murdered by the police at an alarming rate. It’s kind of the same as when your generation saw Rodney King. There were a bunch of people who stood up and said, “Hey, this is happening all the time, and you guys just happen to know about it now because there’s video footage.”

The police force is systematically racist, and it is designed so that they have the right to murder us and not face the same consequences as anyone else. But it is the young folks, the twentysomethings across history, that say, “Hey, we about to switch s–t up.” I think we just happen to be the generation that makes the change.